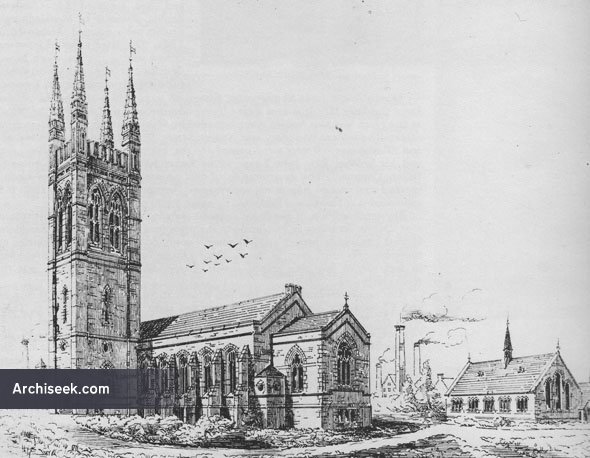 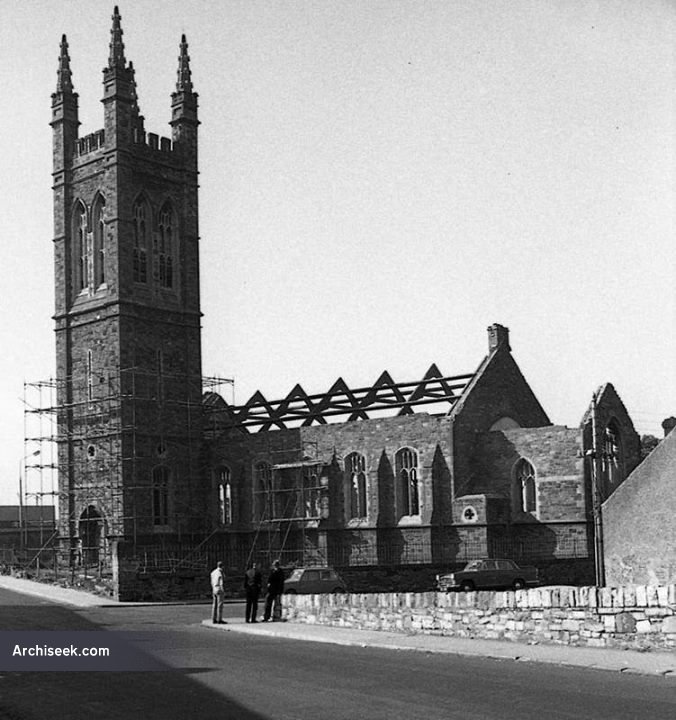 Designed in a Perpendicular Gothic style, as part of a bequest as a Mariner’s Church costing 4,000 pounds. Demolished in 1969.

“We give with our present number an illustration of the new Church and School-house of St. Barnabas, North Lotts. The schoolhouse has been for some months completed and in use ; the church will not be finished until next month. The material used is limestone, with dressings of Bath stone. The designs were by Mr. A. G. Jones, of Molesworth-street ; the contractors, Messrs. Gahan and Son. The entire cost will be about 5,000.” The Irish Builder, April 15 1869.

“It is in what is termed the Perpendicular Gothic style, and consists of nave, 80 ft. by 32 ft. 6 in. ; and chancel, 20 ft. by 18 ft. Advantage was taken by the architect of a fall in the ground towards the north, by which a vestry-room has been provided immediately under the chancel. At the south-east of the building rises a tower 135ft. in height, and 15 ft. square, with handsome spirelets at each angle. In this is placed the principal entrance to the church. The material used is black stone with dressings of Bath stone. The church is fitted with open benches calculated to seat about 500 persons. The entire woodwork is stained and varnished. The works have been carried out from the designs and under the superintendence of Mr. A. G. Jones, of Molesworth street. Messrs. Gahan and Son, of Whitechurch, Rathfarnham, were the contractors.

The cost was over £4,000, and was paid out of a large sum bequeathed by the late Miss Shannon, of Rathmines, placed in the hands of trustees for the erection of three churches in such localities as stood in need of church accommodation. Adjoining the church substantial school buildings have been erected at the expense of J. B. Ball, Esq., Merrion square, under the same architect and contractors, the cost of which was about £900.” The Irish Builder, February 1 1870