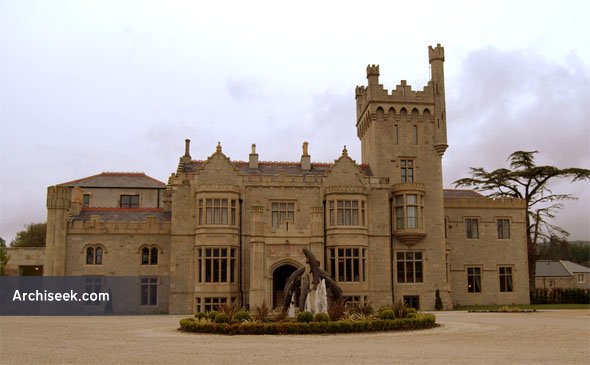 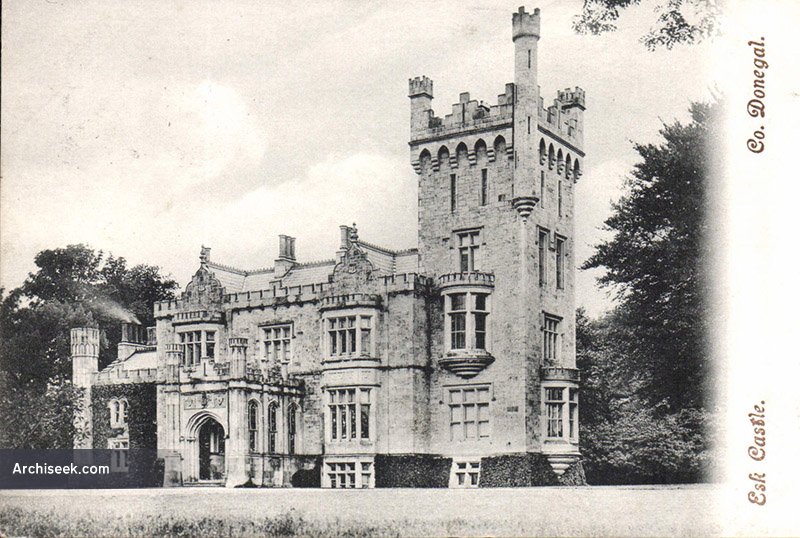 The original castle was first built around 1474. The current Lough Eske Castle was reconstructed in the 1860s by the Brooke family on the site of their medieval castle. The replacement was an Elizbethan Tudor mansion in style with a fine tower to one end.

Run as an hotel from 1930 until the interior was largely destroyed by fire in 1939 except for some Georgian additions. It has now been restored as an hotel after remaining ruinous until around 2007.

“This castle (which is the subject of our illusti’ation) recently erected for Thomas Brooke, Esq., is ill the Elizabethan style. The east entrance front is 130 ft. in length. The principal entrance is by a handsome porte cochere projecting a distance of 30 ft. from the front of house, the spandrils and panelling over the entrance doors being sculptured with the ” Brooke” arms. The steps to principal floor arc contained within the porch. The roof of porch is formed with Gothic ribs and traccried spandrils ; the spaces between rafters filled in with rough plate glass ; the sides of porch have buttresses, also traceried windows and embrasures, and octagon towers on front.

Embattled parapets and gables are introduced. The octagon towers on kitchen wing to be used as ventilation shafts. The great tower overlooking the lough on north front is 22 ft. square and 80 ft. high. The walls of the first floor are built with a batter circular bower windows project from principal floor to north front, and on bed-room floor to east front. The tower is machicolated, crenelated, and embattled, has square turrets on angles, and circular tower on fourth angle springing from corbeling, flagstaff, &c. The dressings throughout are of Mountcharles sandstone. The masonry is of finely punched millstone grit, of a superior quality, procured in the neighbourhood. The mansion stands on a picturesque site, and the tourist, after emerging from the wild and rugged scenery of the famous ” Gap of Barnesmore,” cannot fail to be struck with the beauty and grandeur of the landscape around Lough Eske Castle. The engraving represents the view facing the lough, with its islets and wooded banks, and the wild scenery of the mountains of Bluestack and Croghnageer rising out of it 2,100 feet. The architect is Mr. Fitzgibbon Louch, Londonderry.” The Dublin Builder, December 1 1866.