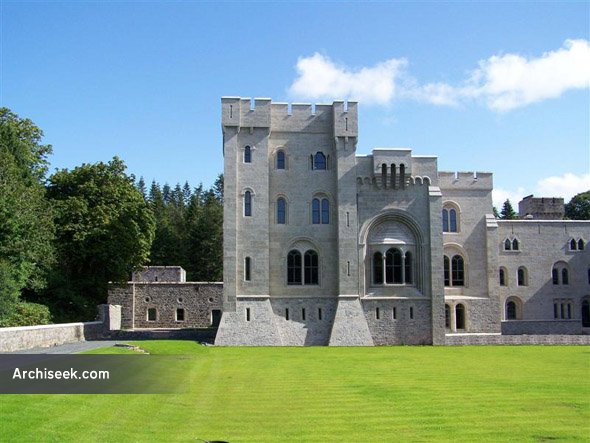 Construction of the castle began in 1819 and finished in the 1850s. It was commissioned by Archibald Acheson, 2nd Earl of Gosford and the architect was Thomas Hopper, one of the leading London architects of the first half of the 19th century. It is the largest Grade A listed building in Northern Ireland. The style of Gosford is that of Norman revival. It was regarded by Robin Fredden, Secretary of the National Trust in 1952 as In around 1952, Robin Fredden, Historic Buildings Secretary of the National Trust, described Gosford thus: “It must be regarded as one of the most original buildings of the first half of the nineteenth century for it has no immediate antecedents. The immense granite castle, reputed to be the largest pile in Ireland, with over 150 rooms, sprang fully fledged in its elaborate neo-Norman detail from Hopper’s imagination. A three-storey keep, such as Hopper was to repeat at Penrhyn, and a massive round tower containing a circular drawing-room, are the salient features of the main elevation. Both are ponderously machicolated and achieve those effects of weight and gravity which are the hallmarks of Hopper’s Norman style.”

The interior he thought to be “cramped and oppressive … only the dining room, with engaged pilasters of pink Armagh marble and white plaster decoration, is effective and pleasing.” He further noted that it was “reputed to be the largest pile in Ireland”, having some 150 rooms. Thomas Hopper also designed Penrhyn Castle in Wales, which is in a similar style.

The 4th Earl of Gosford was forced to sell the contents of the castle in 1921 and during the Second World War it was commandeered and used as prisoner-of-war camp. The Gosford’s, who were ennobled to the rank of Earl in 1806, sold off the entire estate after the war. The Ministry of Agriculture bought the estate in 1958, establishing Gosford Forest Park. In January 2006 the decaying castle was bought by a development company, the Boyd Partnership, which planned to turn it into private homes. In January 2008 the first residents of the new apartments moved in.