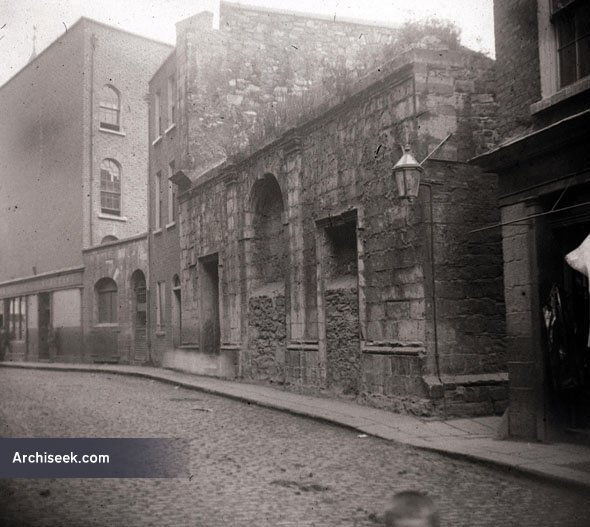 The original church was built in the 11th century by Bishop Donat and was dedicated to St. Nicholas of Myra, the patron saint of sailors. It received its name during the early 14th century, when the parish of St. Nicholas was extended outside the city so as to include the Manor of St. Sepulchre and the Deanery of St Patrick. The parish was divided into two parts: St. Nicholas Within the Walls and St. Nicholas Without.

The church fell into disrepair in the 17th century, and was rebuilt in 1707. By 1835 it was again having problems, and it was unroofed, although a chapel in the church, St. Mary’s, continued to be used until 1847. It was planned to demolish the church and build a new one. However, this was never done, and the parish united with that of St. Audoen in 1867.

Described in ‘The New Picture of Dublin: Or, Stranger’s Guide Through the Irish Metropolis’, published in 1831, as: “The present church of St Nicholas Within was erected in the year 1707. Its front is of hewn stone with a large arched doorcase in the centre over which in the first story is a large arched window with a smaller arched window on each side. In the second story is another arched window immediately under the roof of the church. Over this rises a square belfry 12 or 14 feet above the roof with openings on each side. This church if placed in another situation would make a respectable appearance, hut it is completely hidden on the north, and east, and partly so on the south side, by the houses that are built up against it. The west end which is the front faces to Nicholas street, which is here so narrow that a stranger in passing can hardly take notice of the church…”

Described again in 1837, “The church, an unsightly edifice, situated in Nicholas-street, has been taken down and is to be rebuilt under the directions of the Ecclesiastical Commissioners, till which time divine service is performed in the school-room.”

The greater part of the graveyard was taken over by Dublin Corporation when building the Tholsel nearby. To accommodate Street alignment to Christchurch Place in the 20th century, the remains of the facade were moved back several feet.