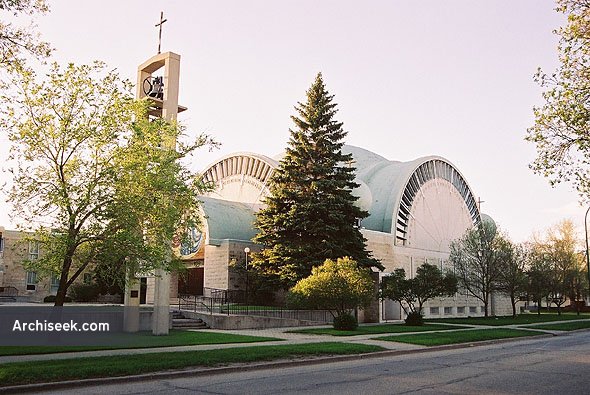 The present St. Nicholas Church was designed in the early nineteen sixties by the architectural firm of Green Blankstein Russell Associates. The structure is built almost entirely of reinforced concrete. Manitoba Tyndall stone is used on the exterior surfaces. The unique domes and arches have a built-up roof over concrete covered by a glass fibre outer skin in the colour of aged copper. The same green hue is found in the eleven-foot diameter fibreglass orbs which grace the corner buttresses and are surmounted by crosses. A twelve-foot cross rises above the skylight in the centre of the exterior main dome. The crosses and orbs symbolize the church triumphant in the four corners of the world; the distinctive Byzantine domes and arches retain the building traditions of the Ukrainian Catholic faith.

Above the main entrance to the church, a magnificent mosaic, designed by Emil Telizyn of Toronto, depicts Christ with His arms extended in a gesture of welcome; the Inscription in Ukrainian and English reads, “Come to me all of you”. The mosaic covers an area of 320 square feet, and is made of thousands of small square and rectangular pieces of blown-glass tiles, 70 per cent of which are of Venetian gold. The mosaic produced by G. Travisanutto in Spilimbergo (near Venice), Italy, was installed in 1988 by Crovatto Mosaics of Yonkers, New York. This stunning work of art was commissioned by the parishioners to commemorate the Millennium of Christianity in Ukraine