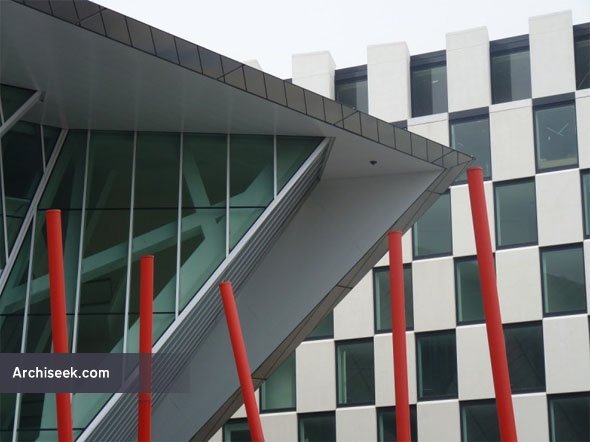 Seven buildings in Ireland are on the shortlist for the World Building of the Year 2010, which will be judged at the World Architecture Festival awards in early November. The winner will be chosen from 236 buildings in 55 countries, ranging from Kazakhstan to the US.

Two of the Irish projects are by international practices: Dublin’s Grand Canal Theatre by New York-based Studio Daniel Libeskind (with Irish architects McCauley Daye O’Connell) and the Aviva Stadium by London-based Populous (with Scott Tallon Walker in Ireland). Scott Tallon Walker’s 250-bedroom Gibson Hotel, with a vast glazed entrance, in the new Point Square in Dublin’s docklands is also on the shortlist. Architects O’Donnell and Tuomey have two buildings in for the award: An Gaeláras – Cultúrlann Uí Chaná an Irish language Cultural Centre in Derry, which has already won an AAI award, and the Timberyard social housing scheme in Cork Street, Dublin, which won AAI and RIAI awards this year.

The new Humanities Research Building in Trinity College by McCullough Mulvin Architects, whose library in Rush made last year’s shortlist, is also in the running. Both O’Donnell and Tuomey and McCullough Mulvin are established design practices with gaining international reputations but the World Architecture Festival award organisers pride themselves on the fact that anyone can win the major prize, from big names – such as Foster + Partners, Zaha Hadid and Studio Daniel Libeskind, who are on the shortlist – to “˜”˜unknown” architects. The final Irish project on the shortlist is by the lesser known, but highly experienced, Dhb Architects, run by Marié Henry (who heads the architecture course at Waterford Institute of Technology), Fintan Duffy and Harry Bent. Their project is a health centre in Waterford converted from a 19th century convent, designed by AW Pugin.

Tags: World Building of the Year 2010