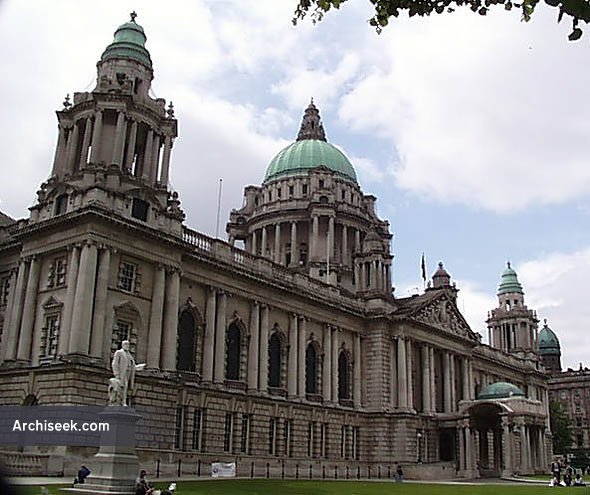 A new UAHS publication by Paul Larmour aims to be much more than the history of a remarkable project and a guide to the building – it is an architectural feast that will delight anyone with an interest in Ulster’s heritage. Belfast City Hall is one of the most memorable buildings in Ireland and one of the best of its era in the British Isles.

As Rome has St Peter’s, and London has St Paul’s, so Belfast has the City Hall – and a new book celebrates the “˜magnificent architectural centrepiece’. “˜Belfast City Hall – An Architectural History’, written by Dr Paul Larmour, one of the leading architectural historians in Ireland, describes the history and architecture of the City Hall, from its inception in 1896 to its completion in 1906. This new publication, published by the Ulster Architectural Society in partnership with Belfast City Council, gives a fascinating account of a building which for more than a century has stood as an icon for the city and a symbol of its civic pride and progress.Speaking ahead of the publication’s launch the Lord Mayor of Belfast, Councillor Naomi Long, commented:”This fascinating publication leaves the reader in no doubt as to why City Hall is not only one of the most memorable buildings in Ireland, but also one of the best of its era in the whole of the British Isles.” From the story of the design competition, to the sources of inspiration for talented architect Alfred Brumwell Thomas’ design for the building and the development of the grounds and its various monuments, the book is packed with interesting facts, more than 200 illustrations and archive photographs.

The exterior and interior of the building are explored with an astonishing amount of detail, which adds depth to the building’s enticing and diverse story. Some of the interior spaces described are surely unrivalled in Ireland for magnificence. Its many gloriously proportioned rooms, with sumptuous marblework, stained glass, metalwork and statues, are all beautifully illustrated with a comprehensive series of modern photographs, many specially taken for the book.

The author also draws upon a range of Thomas’s original architectural drawings at various stages of the design and numerous archival views of the exterior and interior, including photographs of the building during the course of its construction. This book is much more than the history of a remarkable project and a guide to the building – it is an architectural feast that will delight anyone with an interest in Ulster’s heritage.

“˜Belfast City Hall: An Architectural History’ is priced at £15 softback and £20 hardback and is available from the Ulster Architectural Heritage Society online or from the office at 66 Donegall Pass Belfast.