The Directors of Murray O’Laoire Architects Limited (MOLA) has announced that the company is going into liquidation. The firm is unable to meet its current financial obligations as a result of cumulative bad debts and the ongoing difficulty of securing profitable work as well as the increasing difficulties in getting paid on time, or at all.

The firm was recently selected as the preferred candidate to design the €750 million new Children’s Hospital of Ireland as part of a consortium with Brian O’Connell and NBBJ. The contract was announced in October 2009, and the hospital was due to open in 2014.

According to a statement released: “The MOLA Directors want to acknowledge the enormous contribution of so many wonderful, talented and tremendously loyal staff and want to thank them for their professionalism and support over the years. We also thank the many colleagues, advisers, collaborators, contractors and suppliers for their invaluable contributions. Our clients, from all sectors of society and the economy, also merit our great thanks for the faith they placed in us and the opportunities they gave us to contribute. We will do all we possibly can within the constraints of the liquidation process to minimise the impact of this event on our creditors, our clients and our staff. The company is committed to an orderly winding down of its affairs and will hold a creditors’ meeting within the coming days. The company does not propose to make any further comment on issues beyond the detail of this statement.”

Murray O’Laoire Architects was formed in 1979 by Hugh Murray and Seán O’Laoire. Seán O’Laoire was RIAI President from 2008 and recently succeeded by current President Paul Keogh. The company currently employs 127 staff with offices in Dublin, Cork, Limerick, Bratislava (Slovakia), Moscow (Russia), Aachen (Germany), Tripoli (Libya), Barbados and Abu Dhabi and has worked on projects such as Thomond Park Stadium and Tailteann Sports Hall, Mary Immaculate College (both in Limerick), the CIT Cork School of Music, GMIT in Galway, Athlone Town Centre, the Green Building in Temple Bar, Dublin and the Irish Pavillion at the Hanover Expo 2000. They won the RIAI Gold Medal, for the period 1989-1991, for their Tourism Office in Limerick. 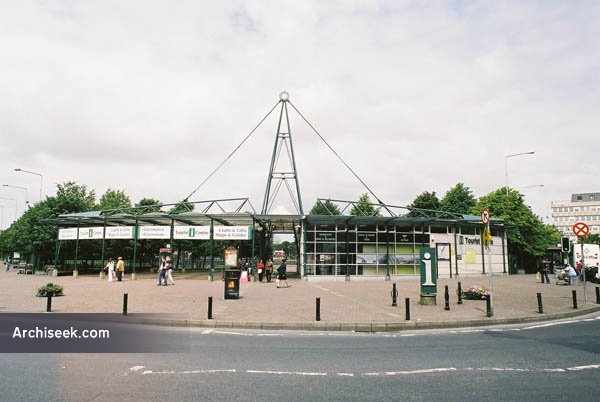 This building was described as “This highly extrovert building is uniquely successful in terms of both urban design and architecture. Its urban significance lies in its fulfillment of a key pivotal role between the river, the 18th century city and medieval street network of Limerick. In doing so it provides the city with a focal point and a significant visual landmark. Its siting, its form and in counterpoint, its transparency all combine to integrate the building with its wider riverside context and maximize the opportunity to be at once a gateway and a place of spontaneous social assembly.”