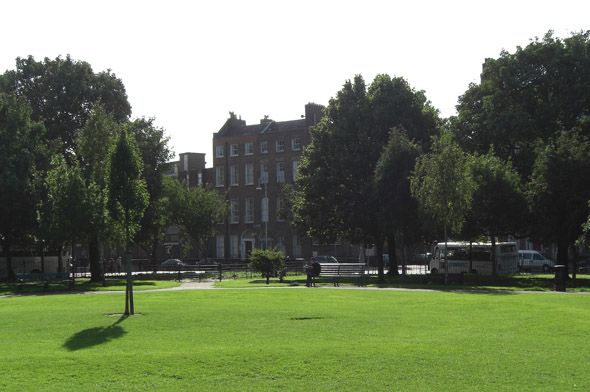 Dublin’s Mountjoy Square is to be declared an architectural conservation area by Dublin City Council. The square, located in the north inner city, less then 1km from O’Connell Street is claimed to be Dublin’s finest Georgian square in that it measures an equal length on all sides, with a symmetrical road layout at each corner. Famously used in the 1980s as a film location to depict bombed-out areas of London during the second World War, the square had, in recent times, become the focus of a campaign for conservation backed by writers and artists. Work on Mountjoy Square began in 1790 and was completed by 1820. The square was home to numerous prominent figures, including brewer Arthur Guinness and writer Seán O’Casey. Writers Brendan Behan and James Joyce also lived beside the square – and it features twice in Ulysses in the chapters Wandering Rocks and Ithica.