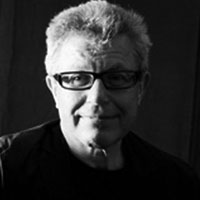 Daniel Libeskind, an international figure in architectural practice and urban design, was born in postwar Poland in 1946, and became an American citizen in 1965. He studied music in Israel and in New York, before leaving music to study architecture receiving his professional architectural degree at the Cooper Union for the Advancement of Science and Art in 1970 in New York City and a postgraduate degree in History and Theory of Architecture at the School of Comparative Studies at Essex University in 1972.

He is presently designing and constructing The Spiral Extension to the Victoria & Albert Museum, London; The Imperial War Museum – North, Manchester was completed in 2002; the Bremen Philharmonic Hall, Bremen, Germany; The Jewish Museum in San Francisco, U.S.A; and most recently, the Extension to the Denver Art Museum, Denver, Colorado.

Libeskind has taught and lectured at many universities worldwide. Currently he is a Professor at the Hochschule für Gestaltung, Karlsruhe, Germany and the Cret Chair at the University of Pennsylvania. His work has been exhibited extensively in major museums and galleries around the world and has also been the subject of numerous international publications in many languages. His ideas have influenced a new generation of architects and those interested in the future development of cities and culture.