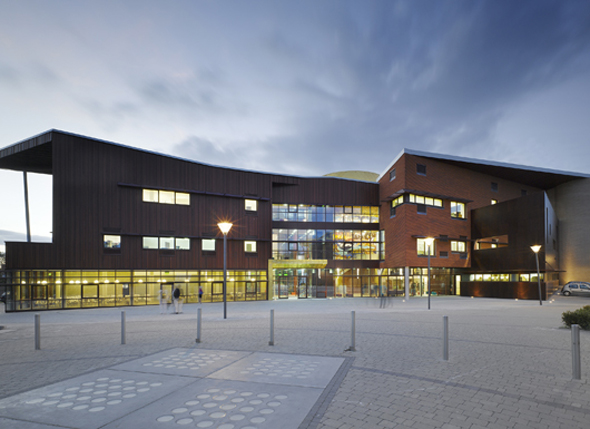 The spectacular new home of the Irish World Academy of Music and Dance at the University of Limerick was officially launched today by An Taoiseach Brian Cowen TD. The launch was marked by a cultural celebration including performances by the Chieftains, the Irish Chamber Orchestra, Rex Levitates Dance Company and by students of the Irish World Academy across contemporary, traditional and world dance as well as classical and traditional music performances.

The new facility will operate as a naturally ventilated building with minimal mechanical ventilation to reduce its long-term carbon footprint. The design, which was developed in response to the ecology of the site at UL on Ireland’s greenest campus, utilised weather data from Shannon airport to understand the microclimate and to design the independent below ground plenum air supplies to the two theatres.

An Taoiseach underlined the importance of the Academy in protecting and showcasing our cultural heritage. He added “the new Academy building not only offers a place to study, examine and develop the many strands of our musical heritage but it also lets us celebrate it, and the rich and varied traditions of other cultures”.

Speaking from the launch Professor Mícheál O’Súilleabháin said ‘this building is like a poem. It has all the practicalities of a safe haven, and all the poetics of a work of art. The Irish World Academy team holds it in trust for the Irish nation and for fellow artists and scholars across the world.”