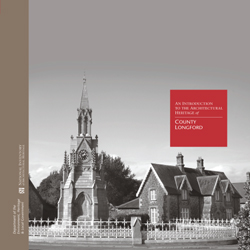 NIAH surveys record a sample of built heritage, ranging from structures of grand design to simple construction, spanning the period 1700 to the present day.

At the event to mark the survey publication the Minister remarked that “The public reaction to the recent catastrophic fire at St. Mel’s Cathedral clearly illustrates our depth and strength of feeling towards historic landmark buildings. Such buildings are significant as symbols of a particular “˜place’ – contributing substantially to the identity of a town or rural area” and added that he understood that “The reinstatement of the cathedral to its former glory represents a considerable challenge”.

The extensive military barrack complex in Longford Town and the 1798 Rebellion battlefield at Ballinamuck are evidence of the place of Longford in the wider history of Ireland.

The Minister noted other distinctive architectural features of the county, notably the picturesque “Heritage Village” of Ardagh – a rare example of a Victorian estate village in Ireland; country estates, most notably Castle Forbes, Carrigglas Manor and Newcastle and a number of fine smaller scale country houses, including Creevaghmore House, Ledwithstown House, both near Ballymahon and the highly distinctive hunting lodge at Castlecor.

The Minister expressed the hope that Longford County Council would employ a Conservation Officer, as this would greatly enhance the Council’s ability to protect the architectural heritage in its care. Funding is available from the Department of the Environment, Heritage and Local Government to significantly assist with meeting the costs of such an appointment.

The publication An Introduction to the Architectural Heritage of County Longford is available from the Government Publications Sales Office, Molesworth Street, Dublin 2, Irish bookshops or online from www.wordwellbooks.com and is priced at €12 and the NIAH survey is free to access on www.buildingsofireland.ie