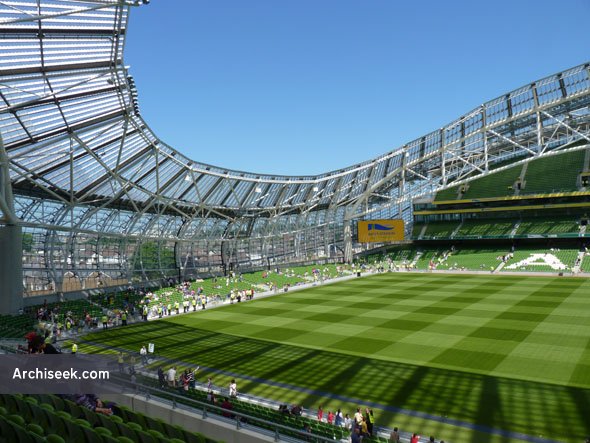 Populous, the Architects of the London 2012 Olympic Stadium, celebrated a double win at the recent World Architecture Festival Awards in Barcelona. Soccer City Stadium, designed by Populous and Boogertman and Partners, won the “˜World’s Best Sport Building’ award, while the Aviva Stadium, designed by Populous and Scott Tallon Walker, won the inaugural “˜ONCE prize for accessible design’ at the prestigious awards.

Soccer City, which hosted the 2010 FIFA world cup final, was chosen by some of the world’s most distinguished architects and renowned industry experts, beating off competition from a shortlist of seven entries. The judges said: “The Soccer City National Stadium makes a strong and memorable connection with its place in history, the game and the future of this area. It is a genuine example of a building forming deep and lasting roots in its culture and giving a new exciting future to an otherwise rundown area, becoming instantly recognisable as the face of the South African Wold cup.” With its main form inspired by the traditional calabash, Populous and Boogertman and Partners have created an “African Pot” which is now recognized instantly by spectators in every corner of the world and has already become a cultural signifier of the new South Africa and the FIFA World Cup.

Populous also celebrated its other success with the new Aviva Stadium being awarded the inaugural ONCE prize for accessible design. The Aviva Stadium, (previously called the New Stadium at Lansdowne Road) is the first truly site responsive stadium of its kind in the world. Its organic form, mass, materials and aspect are defined by the site and its surrounds. The site, in the residential district of Dublin 4, is the historic home of international rugby and football in Ireland where the first game of international rugby was played in 1876. The stadium has been designed to be accessible for people with mobility difficulties, particularly those in wheelchairs, and for people with impaired sight or impaired hearing.

The general principle adopted is that disabled users are integrated with able-bodied people so far as practical. There are separated circulation routes in some locations (which provide safer routes for wheelchair users), but the accommodation is generally available to all. Key accessibility features include, amongst others, spectator seating spaces for the people with disabilities distributed at all levels of the seating tiers and an FM band radio narrowcast system, used to serve the seating bowl, allowing spectators seated anywhere in the tiers to listen to this on radio receivers available from the stadium company.

Ben Vickery, Senior Principal, said: “˜We are delighted that Aviva Stadium won the accessibility award. This is part of a Europe-wide improvement in the standards of accessibility of sports buildings and shows the commitment of the whole team to achieve this. We hope that everyone will enjoy soccer and rugby together.’ Aviva Stadium, designed by Populous and Scott Tallon Walker, was also highly commended in the Sport category awards.