Dominic Stevens: ‘Architecture is about making a society’ 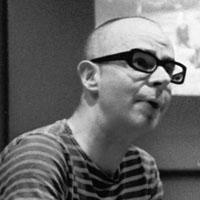 Dominic Stevens knows where every inch of his latest, almost-finished house has come from. “That’s just chipboard,” he says, pointing to the floorboards, “and the façade is plant fibres in bitumen. It’s the cheapest, most efficient way of keeping out the wet, and in Ireland the wet is the biggest enemy. All that wood,” he continues, waving to the beams in the ceiling and walls, “came from the local timber yard, from a local forest. They cut it precisely, so there wasn’t any waste. Look,” he points down to a small pile of planks. “That’s all the leftover. But I left it to Tighe to do the fiddly bits.” Tighe is the neighbour. He’s standing in the next field, vigorously digging a trench. “That man’s a genius carpenter.”

Stevens knows where every inch of his house in Cloone, Co Leitrim, has come from because he’s made it himself (give or take Tighe’s help) and sourced every scrap. From scratch. It’s costing €25,000 (£22,000), and Stevens plans to have it up in five weeks. Factor in the price of the land and connecting to the utilities, and that’s a super-insulated, energyefficient, beautiful modern home for just over €30,000, in just over a month. Stevens will publish the plans and instructions on the internet right down to the lengths of those timber planks so that anyone can download them free and pop up a €25,000 house as niftily as a flat-pack shelving system.

Stevens is the most inspirational architect I’ve met in years, not just for the elegance of his architecture, but for the philosophy that underpins it. His new book, Rural, is his quiet rallying cry for a new type of architecture and a new way of living.