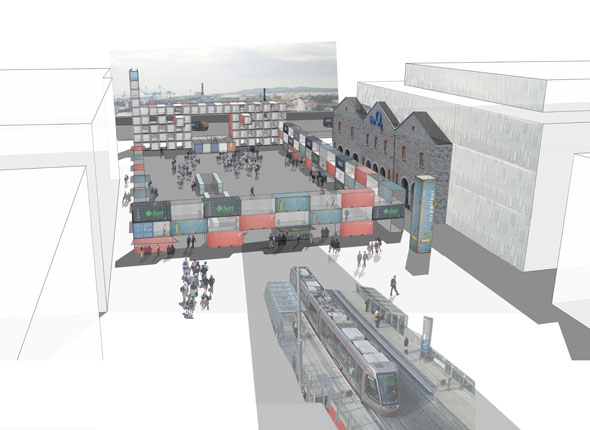 The operators of the O2 have appealed to An Bord Pleanála against plans by Harry Crosbie – who built the venue – for a “Dublin Parlour” to animate the bleak site at the rear. The proposed development, which was approved by Dublin City Council’s planners in February, would involve installing stacks of 200 recycled shipping containers to provide market stalls and seating for free concerts on the upper levels.

The scheme by LiD Architecture was the winning entry in a competition held last August by the Royal Institute of the Architects of Ireland, which attracted 46 entries from Irish and international architects and designers. At the time, Mr Crosbie said the plan for Point Village Square – which would also feature an 80-metre ferris wheel – was a temporary, low-cost solution “to open the area to the public and share our assets rather than letting them lie idle in the recession”.

He forecast that it would bring seven million visitors to the area every year. “This will be a site that will combine the attractions of the world’s busiest concert venue of its size, a market to rival Covent Garden and a unique tourist attraction in the big wheel.”

But Amphitheatre Ireland Ltd, the Live Nation vehicle that operates the O2, is appealing against the Dublin Parlour on the basis that it would compromise the building, which is a protected structure because it incorporates an old train shed.