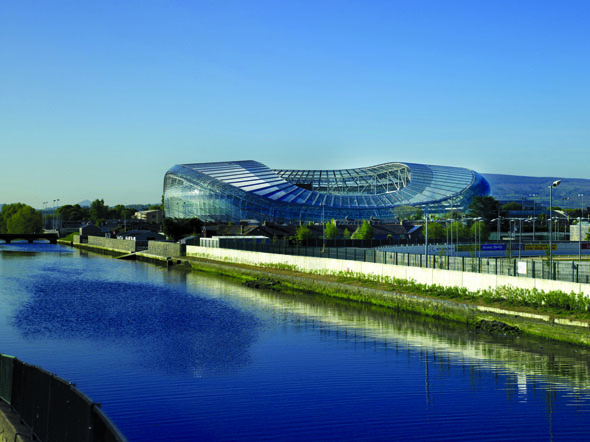 Aviva Stadium, Dublin, Ireland, designed as a result of a collaboration between global architects Populous and Dublin”based architects, Scott Tallon Walker is officially opened today by An Taoiseach, Brian Cowen, TD. Aviva Stadium, previously called the Lansdowne Road Stadium, hosted its first game of international rugby in 1878. The 50,000 seat stadium will be used for international rugby and soccer fixtures and as a concert and events venue.

Commenting on today’s opening, Ben Vickery, Senior Principal of Populous said:”There are some buildings which are a pleasure to be a part of and Aviva Stadium is definitely one of those special moments. We have striven to design a stadium worthy of the sporting occasions that will take place within it, as well as create a building that works in harmony with the local community and environment. The bold design of Aviva’s roof creates the image of the sky coming down to meet the ground in a reflective crystal bowl.”

The key to the success of the design was the sensitivity to the surrounding area. The north end of the Aviva stadium has a dramatic dip to the roof and seating to allow sunlight to the houses immediately behind and likewise at the south end to provide daylight to the buildings along Lansdowne Road. The environment and sustainability were a prominent part of the design process with rain water collected to irrigate the pitch and waste heat from the generators used to heat the water for the toilets. The glass and polycarbonate cladding flood the public areas of the stadium with natural light and even the escalators are fitted with sensors to ensure they only run when people are standing on them.

The continuous curvilinear facade is clad in polycarbonate louvres that reflect light and give the building a “shimmering form of transparent shingles”. Described as “is the first truly site responsive stadium of its kind in the world. Its form, mass, materials and aspect are defined by the site and its surrounds”. A shimmering form of transparent “˜shingles’ rises in the east and west to position the majority of spectators in the desirable side locations of the pitch and falls in the north to minimise the impact of the building on the adjoining neighbourhoods. The transparent roof is lowered to the southern sky to maximise the sunlight onto the high performance sports turf to ensure that the best possible playing surface is produced.

Vickery, who also worked on Wembley and the Australian Olympic stadium, said: “It will stick out on the skyline but in a more gentle way than if we had built it with something more solid. This softens its appearance.”

Four seating tiers accommodate a range of seating types, from general admission to premium, with two separate tiers for private suite holders. The intensity of the Lansdowne experience is enhanced in the new stadium with 50,000 seats with unobstructed views are concentrated as close to the pitch as permissible to create an atmosphere to rival that of the coliseum. Glimpses of the city from within the arena connect this intense spectator experience with Dublin; an experience unique to Aviva Stadium.

The opening fixture on 31 July will be as historic a match as the hallowed turf on which it is to be played. The IRFU has arranged for two composite provincial teams – a combined Connaught/Munster selection will play a combined Leinster/Ulster selection. The first soccer match will be on 4 August when a League of Ireland team plays Manchester United and this will be quickly followed by a soccer match between Ireland and Argentina. The first Rugby international will be on the 6 November between Ireland and South Africa.

Populous is a global architecture, design practice and masterplanning consultancy specialising in creating environments that draw people and communities together for unforgettable experiences. Over the past 30 years, the company has completed more than 1,000 projects around the globe with construction value exceeding US$20 billion. It has worked with 24 Major League Baseball franchises, 30 NFL franchises, 80 professional and civic arena clients, 40 soccer and rugby teams, 120 colleges and universities, 40 convention and performing arts centre clients, 29 equestrian clients and more than 30 major events.