Meet Tom de Paor: 4am at the Biennale

In the first of a series of monthly articles, architecture and design journalist Richard Conway talks to

about the upcoming Venice Biennale.

Tom de Paor gives us a preview of 4am, his piece set to be part of the main show at the 2010 Venice Biennale and discusses his co-curatorship of the Irish Pavilion.

A strange shape lurks beneath a staircase, partially obscured by draped linen, it seems hardly there. The air is heavy with the smell of lavender as a light shines from atop the upholstered stairs. All around, exposed piping gives a solid, functional feel, while a softwood frame gives the impression of a domestic substructure. It is both light and dark at once, familiar but foreign. 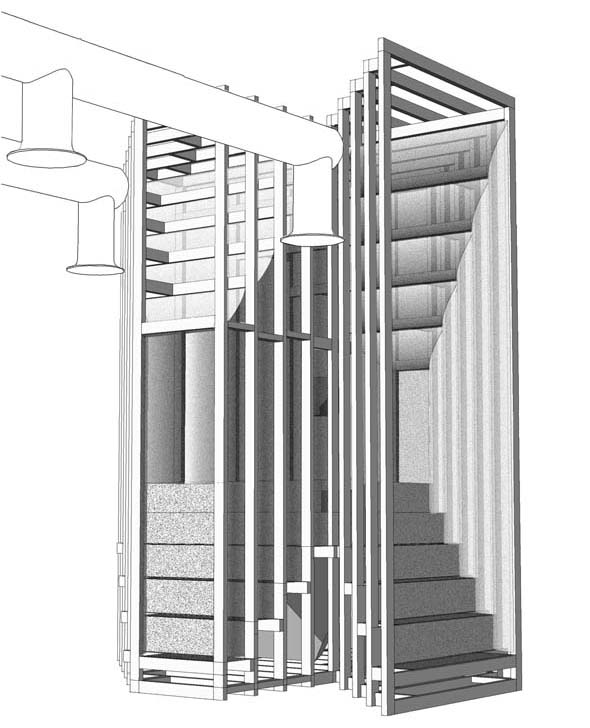 Describing 4am, his piece for the main show in the Palazzo delle Esposizioni at the 2010 Venice Biennale, Tom de Paor paints a picture of a strange, oxymoronic space. Aiming to bridge the gap between opposites, he promises it will be at once a world of linen closets, lavender and domesticity and an alien one of shadows, half-seen spectres and distorted perspectives.

“The argument is that you meet in architecture initially in the domestic and we are trying to grapple with that world of memory. It’s a world of linen cupboards, folding and the smell of lavender, without getting too phenomenological about it”.

Responding to show director Kazuyo Sejima’s brief “People meet in Architecture,” the piece will focus on the “liminal” domestic, or what de Paor terms “that familiar feeling of being in a domestic space late at night, or early in the morning, when the house is asleep and there’s that weird sense of things”.

This concept of the debatable boundary is central to the work, and to his ideas of the domestic in general. De Paor wants to convey a sense of both comfort and discomfort in the everyday home, saying these boundary questions occupy his mind on a regular basis.

“We’ve been doing a series of these squarish plan houses. You always end up playing the game of where the stairs is, and where the servant space is. These questions in houses that are not about modernism, but houses that are about house in a more general sense of the thing. I like that territory”.

Visitors will come at the piece from entrances to the south and to the east, and will be presented with a parallax depending on their approach. The staircase, which will convey a sense of quotidian discomfort by being “over-carpeted like in a B & B”, will take them up passed a glass polyhedron light source in order to take them down again. Meanwhile, the softwood that surrounds will be saturated with pure lavender essence and draped with linen. Positioned under the staircase will be a larger, stone polyhedron.

The shape of both the light and the stone represents the scarier side of domesticity. The stone, as he puts it, is “the “˜thing’ under the stairs,” the archetypal monster lurking just out of our field of vision. With the light acting as its opposite, the two are inextricably linked. The stone will be carved from Kilkenny limestone by sculptor Jason Ellis, while the light will be in collaboration with Simon Walker and glassmaker Berengo Studio from Murano. Both are a direct reference to Albrecht Dürer’s engraving Melencolia I

Dürer’s piece, often said to be the most discussed engraving of all time, depicts what Renaissance Humanists believed to be melancholia of the imagination. An emotional state particular to artists who could see a realm of perfection they could never access. The piece shows a figure in deep thought surrounded by instruments of geometry and architecture, and flanked by a large polyhedron with a ghostly face on its surface.

Much debate has centred on what the polyhedron represents. Often called “Dürer’s Solid”, it has been said to signify everything from the philosopher’s stone to the golden ratio. Closer inspection reveals the ghostly, barely present face on its front (many say there are in fact several faces). Some scholars have pointed out that the polyhedron itself is an impossible object that could not be constructed in reality, while others say it is simply a perfectly plausible truncated cube.

This ghostly, impossible-but-possible shape will highlight a space between comfort and discomfort. The stone being dark, hidden and mysterious, the light being visible, bright and obvious: “You will have the light above, and the rock below. It’s visible but is in the dark,” he adds.

The location of the piece within the Palazzo itself will also emphasise this discomfort. Set to be positioned between the work of Rem Koolhas and Florian Beigel, it comes at a cul de sac of sorts.

It is also through the collaborative nature of the project (in addition to Ellis and Walker, landscape designers Thirtythreetrees and Peter Maybury will collaborate on the linen stitching) that the piece will address Sejima’s theme.

“People meet in architecture through how they collaborate, how they work together,” de Paor says. 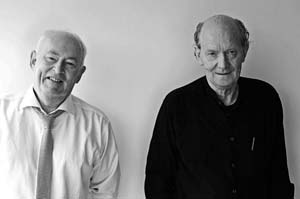 “It’s hinged around what deBlacam and Meagher have been up to for the last 33 years. Their work and the donation of their archive to Irish Architectural Archive.” 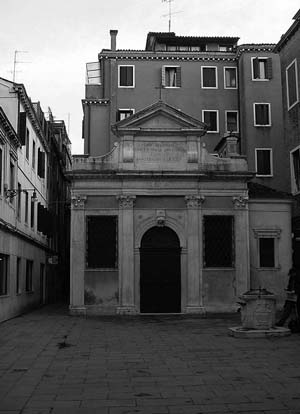 The piece will consist of deBlacam and Meagher’s work presented in large paper anthologies, which will be stacked high inside in Venice’s small chapel San Gallo. Explaining that the venue is archive appropriate, de Paor hopes that the show becomes an archive in itself, albeit a fleeting one.

“San Gallo was an Irish saint and the monastery he set up in Switzerland is famous for it’s archives. We are going to give all the information away rather than making catalogues that people never get. The invitation will be to come in and look at it and take it away. I hope it is very a physical show.”

De Paor hopes the stacked paper will block light from entering the chapel, and will gradually let it in as the paper is taken away. The curators chose paper because, as de Paor says, deBlacam and Meagher “use drawings, they are interested in books, it’s very much the way they work”.

Physical architectural documentation is an important part of the piece, he says because “the more you think about reading rooms and archives and paper, you see it’s a whole culture of architecture that has waned, but somehow has not disappeared. It felt like an interesting thing to pursue”.

Ireland at Venice 2010 is an initiative of Culture Ireland in partnership with the Arts Council. It is commissioned by the Irish Architecture Foundation and further supported by the Department of the Environment, Heritage and Local Government and the RIAI.