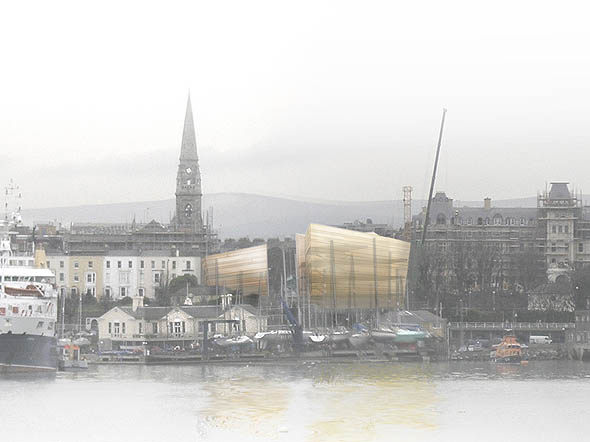 Referring to the natural environment that has shaped this area, four giant monoliths form the new complex, rising up from the granite bedrock. As if eroded by the elements, the blocks define the paths, views and connections. A metaphysical reminder to the craft of generations of stone masons ensuring the centre is rooted in its environment. Acknowledging the power and beauty of nature and the creativity of man.

Whilst the concept of form is derived from the apparent random nature of eroded stone blocks, the actual geometry is a rigorous dissection of a cube into four equal extruded quadrilaterals, allowing rationalization of building components. Two of the blocks are then further eroded where they are intersected by routes across the site. The location of the four monoliths creates public routes through the complex connecting the level of Haigh Terrace with Moran Park and The Metals. Two main entrances at opposing ends of a main axis running North – South, allow people into the heart of the centre from Haigh Terrace and the Metals. The lower entrance, in the base of the Cultural Centre, passes beside the cafe into a central orientation and display area. From this point two generous staircases rise, one into the main library, and the other into the art gallery and multi-cultural area above. The second entrance is accessed from Haigh Terrace. This entrance passes into the triple height library foyer. Directly ahead is the main stair leading down into the orientation and display area. Above Haigh Terrace the buildings are split into the three main uses, The Central Library, the Cultural Centre and the Culture, Community Development and Amenity Department. (CCD&AD)

The existing granite rock determines that the base of the building should remain as close to ground as possible. A basement carpark including service van parking is constructed below the building. A ramp leads from Queens Road under a new deck formed in the pond, raising the water level up to that of the gardens. The parking utilizes the area beneath the pond before passing under the building allowing minimal excavation.

The CCD&AD is purposely moved off the preferred development site to afford the building a much stronger relationship with the existing town fabric. The block sits adjacent to and terminates the existing terrace of houses. It frames views along Haigh Terrace and enhances the setting of the Mariners’ Church.

The Central Library occupies two unified monoliths. They are set away from the bustle of the sea front, closer to the landscape in a peaceful setting.

The Cultural Centre occupies the most prominent part of the site forming a new landmark on the sea front. Having the most outward looking uses within, it is appropriate that the spaces have panoramic views over the harbour and Irish Sea beyond.

Ancillary Areas and Library HQ: These areas are located at the level of Moran Park. The office areas benefit from views out over the landscaped park, with storage areas to the rear where daylight is limited. The excavation for the basement carpark below Haigh Terrace allows the formation of sunken gardens either side of the Culture, Community Development and Amenity Department building providing daylight and ventilation.

Cultural Centre: The shop and cafÅ½, located at street level and facing the sea front, are in the ideal position to attract visitors and add life to the public open areas. The main staircase rises from ground level to upper ground where the Art Gallery is located. From there the stair rises along the front facade to the foyer of the multicultural area, located on level 2. Level 3 houses the translating booths and dressing room, with the workshops and residential artists on the two upper floors.

Central Library: Designed as a box within a box, the library is formed of two distinct areas. The inner box houses the main shelving areas. The spaces between the inner box and the faÂade are then occupied by a series of platforms with voids between, forming a sequence of galleries and full height spaces, within which reading and studying areas are located.

Culture, Community Development and Amenity Department: Entered from the orientation area, this building retains it’s sense of autonomy by being set, on the eastern side of Haigh Terrace.

The current cladding proposals are in line with the desire to produce a landmark building. The external cladding is in two main forms. Translucent glazing in differing band widths with expressed horizontal joints following the line of the roof to each block, forms the external skin to the main library and public areas. Filtered light provides a glow within the buildings during the day and an outward glow at night highlighting the centres significance within it’s immediate context. In certain locations large clear glazed windows allow specific views out to the harbour, park or church as well as allowing views into the buildings.

On less significant facades, the cladding is pre-cast concrete panels with floor to ceiling aluminium powder coated windows. The possibility of using the excavated granite from the basement within the panels would be investigated.

The first stage of environmental design is to minimise the building’s energy demand through bioclimatic design, in which the form and construction of the building is the ‘technology’ by which low energy performance may be achieved. The building’s morphology has been optimised relative to the wind and sun, so as to offer certain environmental opportunities in terms of minimising the energy demand.

The second stage is to meet this demand using high efficiency systems which generate minimal carbon emissions. Through these strategies, a low carbon building may be achieved which responds to the dynamics of the local external environment whilst providing an internal environment that is comfortable for the general public, and optimal for the storage of books.

Minimisation of the energy demand

This proposal capitalises on this potential through its orientation, and distribution of fenestration on southerly and south-easterly elevations. Internally, thermally massive elements provide a means of storing and redistributing this heat. Summer overheating is also a consideration, especially given the high technology requirement of the brief and associated internal heat-gains.

Summer solar control is provided to the South elevation by the existing deciduous trees which flank Moran Park. To the West, the elevation is tilted inward to minimise annual incident radiation. The relatively narrow plan of the individual blocks reduces the requirement for artificial lighting. The arrangement of bookshelves cross-ways through the plan also minimises internal obstruction to day lighting. The majority of the proposed building will be naturally ventilated. A buoyancy driven stack effect is encouraged through the main library block as air is allowed to flow from the bottom to top of the building through a network of voids in the floor plates. The profiling of the roof parapets relative to the prevailing wind directions will also serve to improve pressure differentials from the top to the bottom of the building, and improve the potential for natural ventilation.

From 2008, all planning applications to Dun Laoghaire Rathdown must demonstrate that at least 20% of space and water heating is provided from a renewable energy source. Having minimised the energy demandthrough bio-climatically responsive design measures, the potential contribution that renewables can make in this instance may even exceed this minimum.

The orientation and tilt of the roofs over the library and administration blocks have been optimised to receive maximum incident radiation over the year, and therefore offer the highest yield in terms of hot water generation, and electrical output using solar thermal and photovoltaics.

The principle is to enhance the existing historic features of the site, whilst creating a simple, usable and easily maintanable environment for the local and wider community. The pond is rebuilt above the basement carpark and raised so that the water level is just below that of the park. Christ the King monument is relocated to the pond facing the Mariners’ Church, surrounded by the horse shoe of mature trees. The park itself is simply laid to lawn, providing a communal area for the whole of Dun Laoghaire to enjoy.

Two stone paths cross the park linking the new square by Moran House with the Mariners Church and passing the pond towards Marine Road. The existing path around the pond is reconfigured to allow disabled access from Haigh Terrace. Between the Cultural Centre and Library a new set of cascading stone steps and seating platforms connects Haigh Terrace with the new square by Moran House allowing visitors to sit and enjoy elevated views over the harbour.