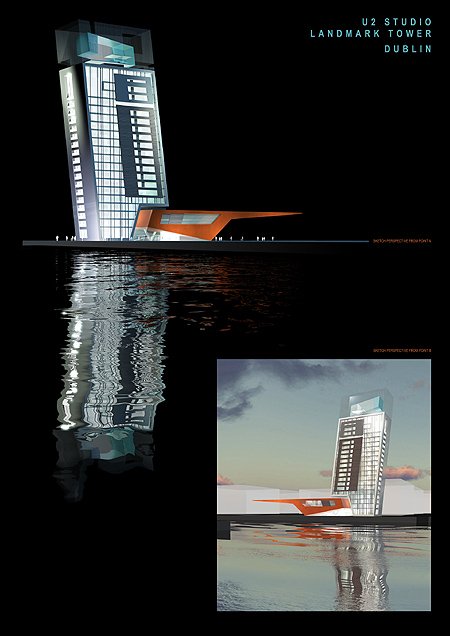 Our approach has been to design a new icon for Dublin; a striking beacon that identifies the city as a major international centre, associated with innovation, creativity and sustainability.

The design represents an environmentally aware and sustainable approach to life in the new millennium. The multiple uses of the building are housed in three distinct elements, arranged in an ensemble that seeks to respond to its context in a dynamic and inspiring way. These elements work at differing scales applicable to both the enormity of the surrounding landscape and riverscape as well as their immediate context. The forms hint at movement, non-permanence and geological elements making the building more than just an extension of the city but rather an intrinsic part of its setting.

A solid, metallic plinth, with a cantilevered canopy over the southern end of the site, houses the commercial and leisure uses. This element serves as a counterweight to the slender tower, which tilts dramatically towards the River Liffey in order to assert its presence in this crucial urban position, and which houses primarily residential space. Above the main form of the tower is the studio for U2, which is expressed as a crystalline object within a series of environment-controlling layers.
The podium is clad in pre-oxidised steel to lend it visual weight and a distinctive, rich colour and texture. Its cantilevered canopy is an extension of the main form and carries an elevated green meadow along the length of the site. It is perforated at the southern end to allow sunlight to filter through to the terrace of the restaurant below. The bar, club and restaurant are accessed from a space that separates the podium from the tower; this space links the access road to the west with the dockside to the east.

The tower itself is a sheer block that unequivocally responds to its position on the campshires by leaning out towards the river, addressing the scale of the water and emphasising its role as a beacon. The angle of the tower creates a greater public realm at ground level and improves the street setting of the protected structure. At its base the tower is modified to sit just above the wedge of the podium, suggesting a rift or fissure. Around its narrow sides and roof it is wrapped in smooth grey metal; on the long sides a double skin of glass, separated by an inhabitable winter garden, allow transparency in daytime and allow the building to radiate at night. Areas of timber on either side give the flanks texture and emphasise the dynamic angle of the tower.

At the top of the tower, the angled lines of the building are continued beyond the main parapet level, but in a metal mesh or gauze that is ephemeral and lightweight, in total contrast to the solidity of the tower below generating a striking architectural feature. This means that the studio above is contained within the dynamic form of the tower, but has its own identity. The mesh structure acts as a screen, filtering the sunlight to the studio, but it has apertures cut into it to allow pre-determined views of the city from certain points in the space. A glazed enclosure within the mesh provides a large weatherproof space, in which the studio, itself partly glazed, sits. The studio has discrete, dedicated lift access from a private zone within the basement and is also be accessed from street level.

The proposal has been reviewed and developed by a team of international consultants on the basis of quality, value for money and technical merit. This team consisting of structural engineers, mechanical engineers, quantity surveyors and ecologists have worked with the architect to ensure that the scheme is efficiently designed and technically resolved in terms of structure, service requirements and the usual building regulations. Through its angled, non-curved form, repetition of accommodation and efficient structural core, it offers both ease of construction and value for money. It complies fully with the Dublin Docklands masterplan and the Grand Canal Planning Scheme.

An holistic conceptual approach ensures that the vision for a sustainable, environmentally conscious building is integral with the concept and not a veneer. The uses are appropriate and sustainable, and will act as a catalyst for the regeneration of the area. Some are new to Dublin, like small live/work units at the base of the tower, meaning that the building has a 24-hour life and will not be a dormitory. The majority of the apartments are small, reflecting demographic and market requirements, but allow for flexible lifestyles. The apartments all have access to a winter garden, an environmental buffer that allows an abundance of natural light and air with controlled heat gain and loss, helping to minimise energy consumption while providing fully useable amenity space.

A ‘car club’ is proposed, whereby residents have dedicated access to a car rental company affiliated to the scheme; there are also large areas for bicycle and motorcycle parking in the basement. A waste management system will separate rubbish for recycling, and rainwater will be stored for flushing toilets and other grey water uses such as watering the large ‘meadow’ on the top of the podium building. The angle of the south-facing elevation of the tower allows for the installation of photovoltaic panels to further reduce the building’s energy consumption.

The mix of uses within the scheme, are sustainable and long-term and will contribute to the vitality of the area. Its provocative design will be a catalyst for the regeneration of the area and, together with its environmentally sustainable agenda, be symbolic both of the rebirth of the Docklands and Dublin’s role as an international city.