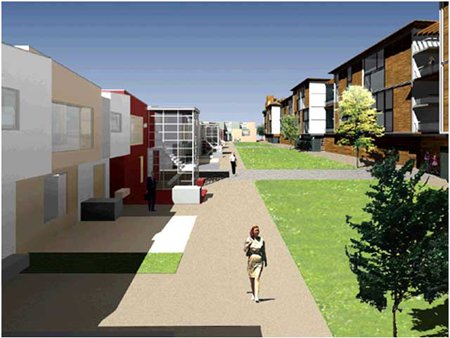 The edge of the High Street is re-inforced with a line of Apartment Villas. The bulk of the villas anticipates the scale of future adjacent buildings along the high street while their detailed articulation offers a connection to the smaller scale Courtyard Housing. The curve of the proposed access road to the north of the site is emphasised by the form of the Crescent Courtyard Housing. These taller buildings shelter the site interior which is densely occupied with lower Courtyard Housing.

The layout geometry comprises 2.5 metre wide parallel bands running east west. Dwellings are either 5.0 or 7.5 metres wide but can vary in length, providing a variety of floor areas and dwelling types. Five metre wide access bands separate blocks of Courtyard Housing and provide pedestrian connections and views through the site, linking the development with Silloge Gardens. Vehicle Access is via three north-south cul-de-sacs.

A large open Garden at the centre of the development consists of a series of birch trees planted on a ‘closed community’ of mixed herbs and grasses with a paved perimeter. A single underground car park below the Garden serves the Apartment Villas and Crescent Courtyard Housing.

The northernmost Apartment Villa has two timber clad penthouse apartments at the top, marking the corner of the site. The Apartment Tower on the opposite side of the High Street consists of a mixture of student ‘group’ maisonettes (2 per floor) and executive flats and penthouses with commercial space on the ground floor. The Apartment Villa and the taller Apartment Tower act together as an asymmetrical ‘Sentinel Gateway’ spanning the High Street.