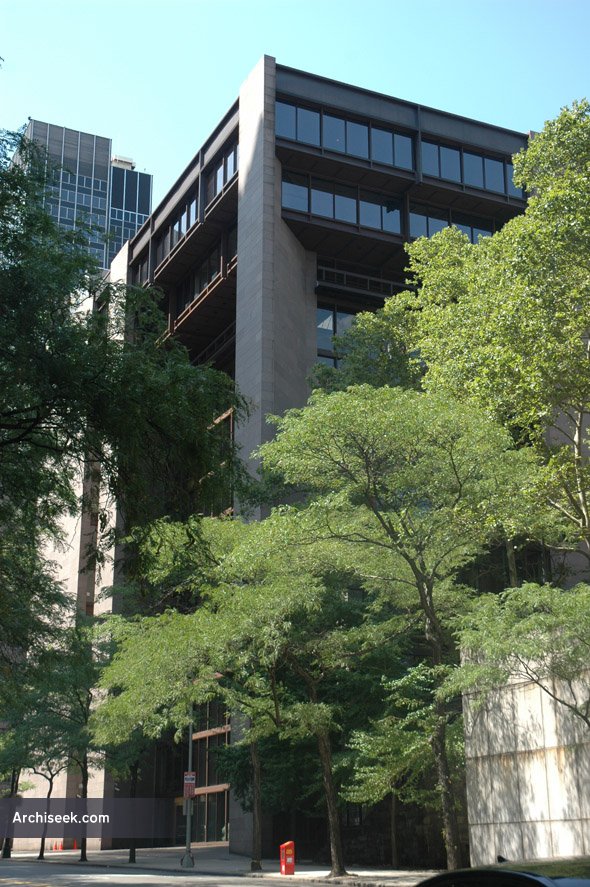 The Ford Foundation Building pioneered the spacious, green, full-height atrium. Supported by an exposed steel structure, the building takes the form of a glass box enclosing an interior atrium which rises the full height of the building to a skylight. Offices are located around this central court with a view into the atrium garden which also serves as a public space. The humane environment created by this layout reflects the lofty values of the foundation which supports the arts and humanitarian causes. The layout of buildings around atrium spaces or winter gardens would later become popularized in the shopping mall and numerous skyscrapers of the 1980s.

When the design was unveiled in 1964, Ada Louise Huxtable wrote in the New York Times that it was “an object lesson in the possibilities opened by fresh thought and a creative approach to the city’s most important commercial building problem: the provision of ample and impressive headquarters for large corporations or equivalent organizations, in structures that have some civic conscience as well.” And just prior to the project’s completion in December 1967, Huxtable praised its “original, highly romantic beauty” and calling the atrium “a horticultural spectacular and probably one of the most romantic environments ever devised by corporate man.”

“The Ford Foundation building is a radical departure from the usual kind of New York office tower. Roche, who was the principal designer of this building, aimed at producing an environment for the prestigious Ford Foundation in which the individual worker or visitor could identify ‘with the aims and intentions of the group.’ The result is, as far as I know, unique in modern building: within the confines of a twelve-storey block, a vertical conservatory shaft rises to full height and windows open on to this planted space from all floors. The two uppermost floors contain the executive offices and dining areas which, instead of being planned on an L shape, close the square of the building.” “” Dennis Sharp. Twentieth Century Architecture: a Visual History. p286.

“This building creates an appropriate environment for its occupants, a space that allows members of the Foundation staff to be aware of each other””to share their common aims and purposes, and that assists them in fostering a sense of working family.

“The building is as low as possible and observes the lines and planes created by other buildings on the surrounding streets. The structure is a composite one, using concrete for bearing members and steel for spanning. The scale is large on 42nd Street where it terminates the thrust of that street, and is modest on 43rd Street where the street is more residential in character.” “” from Yukio Futagawa, ed. Kevin Roche, John Dinkeloo, and Associates, 1962-1975. p57.