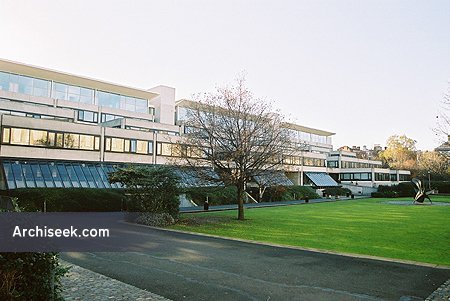 Built as an Arts faculty and containing lecture theatres and seminar rooms, libraries, an art gallery and administration and social facilities for over 200 staff and 3,700 graduates and undergraduates. The building was originally constructed between 1968-79 with further work between 2001-03. The building has two distinct elevations – one to Fellows Square which it forms with the Old Library and the Berkeley Library, and one to Nassau Street where it is set back from the street behind the high railings.

Between 2001 and 2003, a new top floor was added to the original building, again by Ahrends Burton Koralek. This has been less than successful on the Fellows Square elevation, where the building stepped back at each level – the new floor continues upwards from the previous top floor. On the Nassau Street elevation, the extension works better as the new floor provides a pavilion storey for the building. The horizontality of the new roof and overhang contrasts strongly with the vertical emphasis of this elevation.