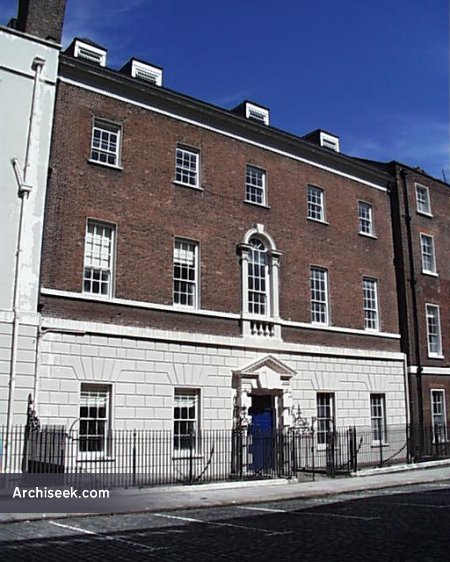 The interior of No 9 Henrietta Street has an excellent staircase and hall and can be seen through the courtesy of the Sisters of Charity in the afternoons from April to September.

The house was described in some detail in The Irish Builder, July 1 1893 – “This beautiful mansion, built after a design by Richard Castle, the architect of the Parliament House, is, with the exception of Blessington House (No. 10), the oldest house in the street. It was built about the year 1734, by the Rt. Hon. Thomas Carter, Master of the Rolls from 29th Dec., 1731, till 24th April, 1754, who took a lease of the plot of ground on which the house stands, from the Rt. Hon. Luke Gardiner.

The façade of the house has no portico, but there are two fine engaged Ionic columns, and above the door an arched window with two narrower ones, members of the larger arched one, and four others—the three-ope window forming the centre. There are five windows in the upper storey, and a project ing cornice gives an architectural air to the whole façade. On entering, a fine stone staircase is at the right hand, broken into two flights, which by easy gradations lead up a landing place to the front drawing-room door, this lobby being supported by two columns making a fine feature in the hall.

A string-course ornamented by the wave pattern (the Kuma of the Greeks, the Cyma of Latin architects, so common in the best early houses of the beginning and middle of the last century in Dublin) marking the levels of the floors and landings, runs round the hall at half its height. On the side of the staircase opposite the front windows are three blank opes corresponding in size and form to the windows, to screen and yet allow light to a second staircase. It is a very uncommon feature, and gives a very classical character to the hall. Behind the two columns which support the landing place, or lobby, is the door to the front dining-room ; above is the door to the principal drawing-room. The principal diningroom looks backwards upon a garden, though the view is marred by the backs of the houses in Upper Dominick-street, or New Dominick-street, as it was first named when opened in 1808.”