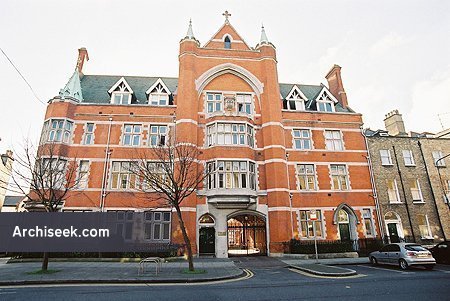 Probably the strangest 20th Century building in Dublin and definitely the last hurrah of Victorian Gothic for a religious based institution, this little known building is tucked away on Hatch Street close to Stephens Green. Built in 1913 around a quadrangle, it was designed as a student resident to be run by the Jesuits. Powell was a Dublin eccentric being known as God-on-a-bike due to his mode of travel and long white beard. The Hall is very well detailed with stained glass by Evie Hone and a fine oriel window that appears to rest on a slender column.