1954 – Grotto of our Lady of Lourdes, Cook’s Creek, Manitoba 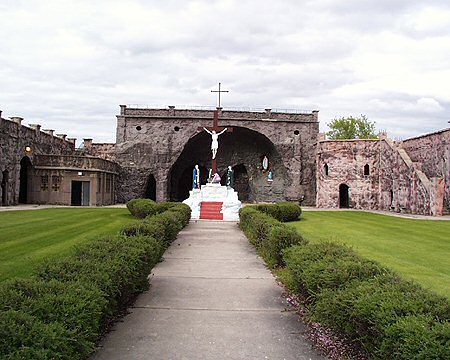 Begun in 1954 by Father Philip Ruh, the Grotto is both a religious centre in its own right, and a tourist attraction during the summer months. Ruh saw it as a logical setting for what he envisioned as a spiritual nucleus for Catholics in Canada.

In appearance, the Grotto resembles a ruined castle with a large central cave. Built of steel rods and cement, the gray arches are rendered to resemble rock. The interior “caves” contain the Stations of the Cross. There are two ramps, one on the north and one on the south, which lead to the elevated levels of the structure. The higher levels which both provide a prominent view of the grounds and the surrounding prairies.

When Father Ruh designed the Grotto in 1954, he was seventy years old. He died in 1962 before it was completed. Although he had produced many architectural drawings for his churches, he never put his final design for the grotto on paper. It was completed after his death to what was thought to be his design. But no-one can really be sure what he intended.