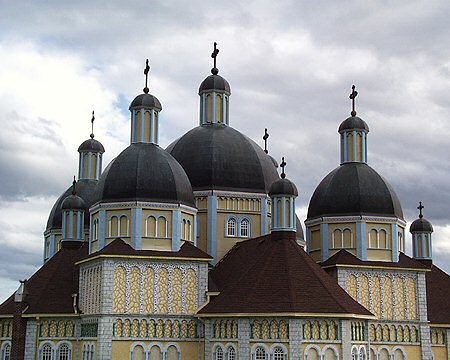 The Church of the Immaculate Conception or as it is popularly known, the Cathedral of the Prairies is a Ukrainian Catholic Church built in the middle of the Manitoban countryside. Fr. Philip Ruh was a Oblate priest who liked to design churches wherever he was stationed. He was responsible for churches in Alberta as well as Manitoba, and built a large church at Mountain Road, Manitoba which unfortunately burned down in 1966.

Ruh started this church in 1930 and it was finally consecrated in 1952. It was originally dedicated to St John the Baptist but was renamed and a massive grotto was started alongside. Unlike the Mountain Road church, this is constructed of brick and cruciform in plan, 140 feet by 100 feet.

There are nine round domes, said to represent the nine ranks of angels. There is a large central dome which rises to 114 feet above the ground, one on each arm, and one at each corner of the central crossing. The building includes transepts, chapels and an apse and these are expressed externally. The massing of this forms is inspired by the Byzantine Ukrainian tradition in architecture

The exterior is brightly coloured with various paint effects utilised to make the building look more elaborate that it actually is. The farming community was unable to bear the financial cost of external carvings or traditional architectural detail. Thus much of the external decoration is painted plaster.

Although lit by many small windows, the interior is quite dark and gloomy. Again, the walls and columns are painted in bright colours. But the eyes are drawn to the apse and main altar. Here the backdrop to the altar are painted panels depicting scenes and figures from the bible. The main altar is flanked by two side altars.