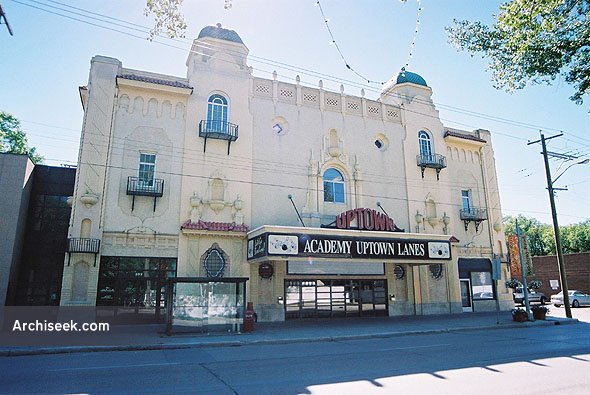 Opened on 24 Dec 1931, the interior of the theatre was gutted in 1960 and was turned into a bowling alley which it still functions as today. The Uptown was Winnipeg’s only atmospheric theater, designed by a local architect Max Blankstein. Little of it’s former splendor is evident as the interior was totally gutted in the conversion to a bowling alley. The exterior however, remains as built in a Spanish mission style with stucco, twin cupolas, niches and wrought iron railings. The original marquee, minus attractions panels still has the original neon lettering proclaiming ‘Uptown’. Originally there were two small stores at either side of the entrance doors under the marquee. The stucco and scored plaster theme was repeated on the interior false building fronts. Windows of the buildings along the side walls were back lit with amber lights while the side wall false balconies had persian rugs over the railings. The theater was a true atmospheric with deep blue ceiling pierced with twinkling stars to resemble the nightime sky. A Brenograph projector provided cloud effects, rising and setting moon and even a plane flying over.

Blankstein’s plan for the theatre was to combine the styles of two other atmospheric movie theatres in Chicago: the Avalon (designed by John Eberson) and the Uptown (designed by C.W. and George Rapp). The original name for the Uptown Theatre in Winnipeg was actually the Avalon, but Blankstein changed it before its opening.