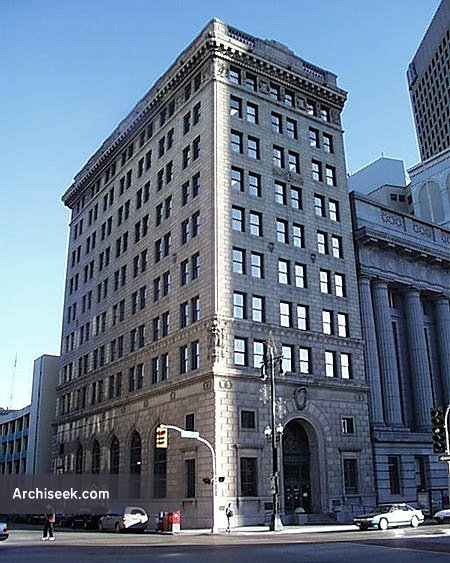 In 1897, the building and lot on the south-east corner of Main and McDermot was purchased for $30,000 by the Bank of Hamilton. Extensive alterations and an addition were undertaken before the Bank moved into new premises in 1898 on the same site. This renovated building served well until 1915, when it was discovered that construction of the new Bank of Commerce next door had caused serious settlement problems to the older structure. Bank officials decided to demolish rather than repair the structure, and plans were undertaken for a new Bank of Hamilton on the site. Architect John D. Atchison was commissioned to work in association with H.C. Ingalls and F.B. Hoffman Jr.

Work commenced on Atchison’s plans in July 1916, but due to material shortages caused by the war, it was not completed until 1918. The cost was $400,000. The outer walls are brick, faced with limestone, with hollow tile used for interior portions. In a lengthy article about the handsome new bank, Construction magazine praised the simplicity and elegance of the façade, nothing the decorative cornice and the few sculptural accents. Arched windows form an arcade on the north elevation which brings in natural light, while arcading also defines the interior spaces of the banking hall and the alcoves of the mezzanine floor. There is a massive archway over the main entrance features a magnificent bronze grill with the Bank of Hamilton emblem in the centre.

In 1921, the Bank of Hamilton noted a marked shrinkage in customers’ balances, and some of its Manitoba branches were closed. Despite reassurances in the annual report of the Bank of Hamilton c.1922, negotiations were soon underway for the 1923 amalgamation with the Canadian Bank of Commerce. The merger was effected on 31 December 1923, where after the Bank of Hamilton ceased to exist as a separate corporate entity.

In 1981-82, architect Robert Gregoire of the Prairie Partnership supervised the restoration of the banking hall of the Hamilton Building. The marble and gold leaf were cleaned, original spaces restored and woodwork returned to its original finish in the restorative work. The upper storey offices were renovated to modern standards. In the summer of 1982, the Department of Environmental Planning of the City of Winnipeg moved into the historic Hamilton Building and now occupies the entire structure.