1907 – Our Lady of the Prairies Monastery, Winnipeg, Manitoba 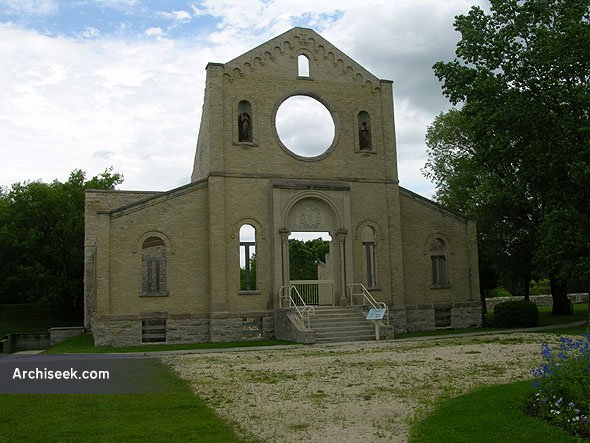 Archbishop Taché of St. Boniface persuaded the Abbot of Bellefontaine, France, to establish a home for Trappist monks in St. Norbert. The Trappists were an independent branch of the Cistercian Order which began in Normandy after 1664. In 1892, the monks arrived at Nôtre-Dame des Prairies (Our Lady of the Prairies).

The first monastery building, constructed shortly after the monks arrived in 1892, was a three-storey wooden structure on a stone foundation which featured a chapel, porch and bell tower. It was adapted as a house for guests in 1904 when the monks moved to a larger residence built nearby. In 1912, the guest house was destroyed by fire. The monks replaced it immediately with a new guest house, the building now occupied by the St. Norbert Arts Centre.

The chapel and monastery were completed between 1903 and 1907. Built of brick and tyndall stone in a Romanesque Revival style, the chapel featured a rose window, silver-domed bell tower, and a cluster of seven smaller chapels. Attached to the chapel was the monastery, which repeated the rectangular floor plan, mansard roof and dormer windows of the guest house.

In 1975, the Trappists decided to relocate to a more secluded location near Holland, Manitoba. By 1978 most of the outbuildings had been taken down. Only the chapel and monastic wing, guest house and gate house remained. Most of this was destroyed in an arson attack in 1983.