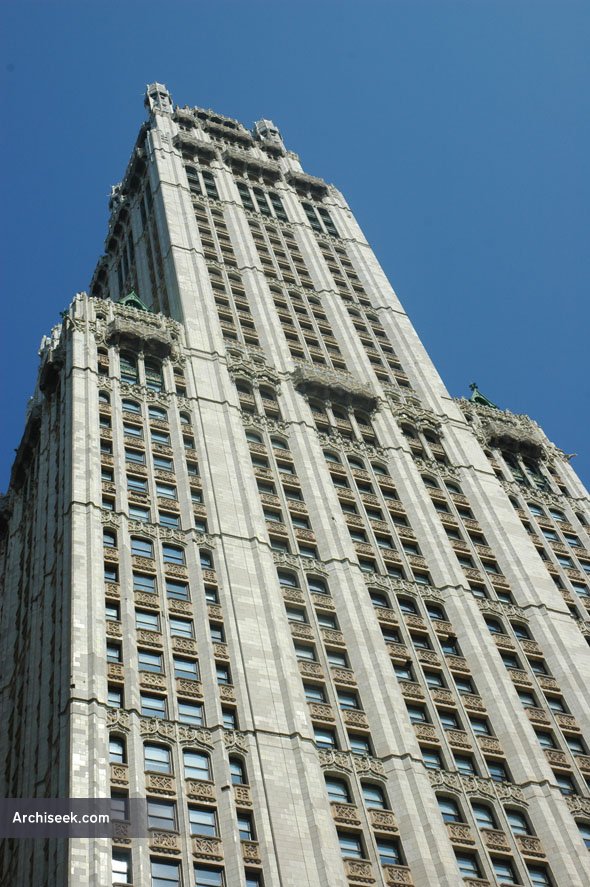 The Woolworth Building was constructed in neo-Gothic style by architect Cass Gilbert, who was commissioned by Frank Woolworth in 1910 to design the new corporate headquarters. Originally planned to be 625 feet high, in accordance with the area’s zoning laws, the building was eventually elevated to 792 feet. The construction cost was $13,500,000. On completion, the Woolworth building overtook the Metropolitan Life Insurance Company Tower as the world’s tallest building. It remained the tallest building in the world until the construction of 40 Wall Street and the Chrysler Building in 1930; an observation deck on the 57th floor attracted visitors until 1945.

The building’s tower, flush with the main frontage on Broadway, is raised on a block base with a narrow interior court for light. The exterior decoration was cast in limestone-colored, glazed architectural terra-cotta panels. Strongly articulated piers, carried””without interrupting cornices””right to the pyramidal cap, give the building its upward thrust. The Gothic detailing concentrated at the highly visible top is massively scaled, able to be read from the street level several hundred feet below. The ornate, cruciform lobby has a vaulted ceiling, mosaics, and sculpted caricatures that include Gilbert and Woolworth. Woolworth’s private office in marble in French Empire style is preserved. The building was owned by the Woolworth company until 1998.