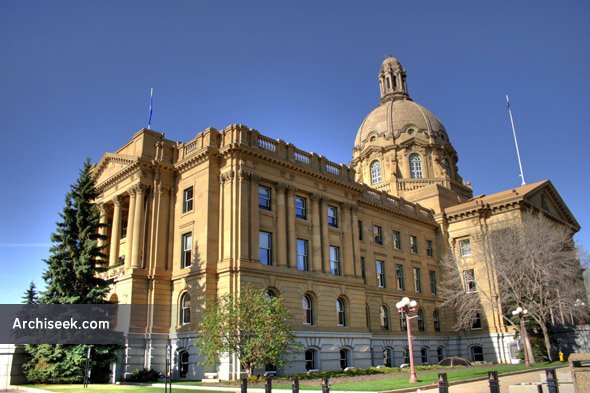 The Alberta Legislature Building was built between 1907 and 1913 in the Beaux Arts style popular in Canada at this time for legislature buildings. The much larger Saskatchewan and Manitoba legislatures, also under construction at this time, are also in the style which was fashionable in North America between 1895 and 1920. The use of Greek, Roman, and Egyptian elements was considered appropriate for public buildings as they suggested power, permanence, and tradition.

The building is supported on concrete piles and constructed around a steel skeleton. The first floor is faced with Vancouver Island granite; upper floors feature sandstone from the Glenbow Quarry in Calgary. The interior fittings include imported marble, mahogany, oak, and brass. The building is 55 metres (180 feet) long and cost $4 million dollars.

The main entrance leads directly into the rotunda, which is encircled by marble columns. Its walls rise from the main floor to the vaulted dome, a distance of 55 metres (180 feet). The rotunda connects the east and west wings of the main floor to the great marble staircase that leads to the Assembly Chamber. The Chamber has its own dome and is lit by stained-glass skylights and about 600 light bulbs.