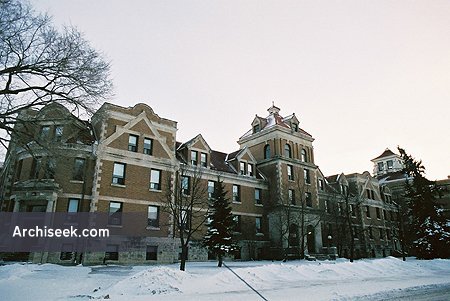 This student residence was the largest of the original campus buildings. Facing northeast towards the Administration Building, its facade stretches the full five hundred and fifty foot depth of the Duckworth Quadrangle. When it opened in 1912, it accomnodated two hundred women and three hundred men.

Designed in a style similar to its Georgian campus contemporaries, the exterior design of the building presented a challenge to its architects Samuel Hooper and V. W. Horwood. The result was a building that uses much of the vocabulary of traditional architectural detailing. Twin block towers mark the entrance to the residence wings on either side. The extreme corners are given sweeping curves and their entries are treated with Tuscan columns. The use of salmon-red brick, limestone beltcourses, cornices quoining, and red Spanish-tile roof is consistent with all the original University buildings.

Tache Hall bears the name of Archbishop Alexandre Antoine Tache, one of the people whose influence helped to establish the University of Manitoba.