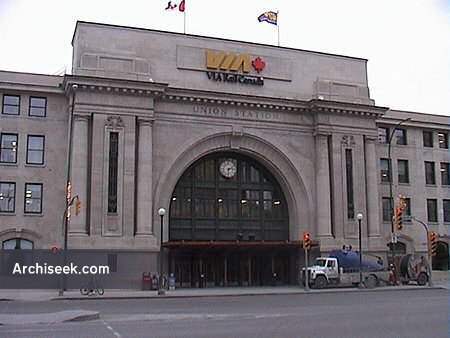 Of the many railway buildings in Winnipeg, the crowning glory is Union Station which closes the vista down Broadway with its imposing bulk and dome. The building was intended by the Canadian Northern Railroad and Grand Trunk Pacific Railroad to surpass the nearby station of the Canadian Pacific. Designed by Warren & Wetmore who were responsible for Grand Central in New York, Union Station extends for some 350 feet along Main Street and is not quite symmetrical, the triumphal arch entrance being offset to close the axis of Broadway. The entrance doors are set under a projecting decorative iron canopy. Passing through a small intermediate space, the passenger emerges into the large central hall.

The exterior of the building is quite austere. With the exception of detailing around the entrance and the ground floor, the facade has a plain white limestone finish with little embellishment. The area around the main entrance has fine detailing in the doorways, canopy and decorative ironwork.

To the lefthand side of the main entrance, a smaller entrance underneath the office accommodation features an attractive canopy.

The interior of the station is dominated by the domed rotunda ticket hall which is 100 feet high. This wonderful space is quite dim as it receives no natural light. The rotunda has four large lunette arches with alternating mezzanine balconies and is topped by the shallow dome.

Elsewhere in the station, there are some nice details on staircases to the platforms.