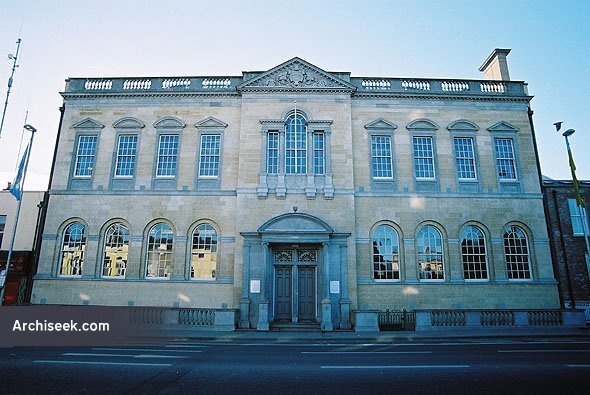 Designed originally by the city architect C.J. McCarthy, and extended nearly one hundred years later by his successor, the Dublin City Architect’s Department, the Gilbert Library is both a public lending library and city archive. The exterior of the original block is finished in sandstone with limestone dressings, and has nine bays, with the central bay breaking forward with a porticoed entrance. Over the entrance is a Palladian window. The building has been extended to the rear to increase accommodation and facilities. Semi obscured from Pearse Street, the large curved roof shell is now the dominant feature of the building when viewed from the nearby railway line.

The services offered at the Pearse Street building includes the Dublin City Archives and its important collections, including medieval treasures such as the City Charters and City Assembly Rolls; the archives of Europe’s first planning authority, the 18th century Wide Streets Commission; the archives of the Mansion House Fund, documenting the impact of the Little Famine of 1880; and the papers of notable theatrical figures, such as Jimmy O’Dea and Michéal Mac Liammóir.

The refurbished and extended Dublin City Library & Archive was designed in-house by the City Architect’s department, to a brief prepared by the City Libraries and Archives management team. Funding of €9 million euro came from Dublin City Council and the Department of the Environment & Local Government.