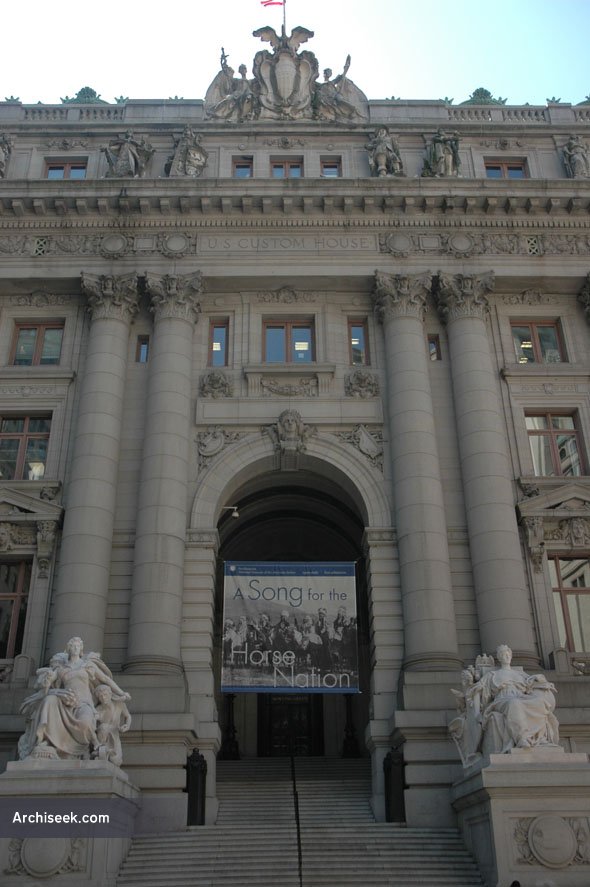 The building was designed by Minnesotan Beaux Arts architect Cass Gilbert, whose selection to design the building was marked with controversy. In 1899, the United States Department of the Treasury sponsored a competition for the design of a United States Custom House in New York that would be erected on this site – Gilbert “won” the competition. As an architect from St. Paul, Minnesota, he saw the move to New York as a great opportunity. However in 1893 the Tarsney Act permitted the Supervising Architect to hire private architects following a competition. The Supervising Architect James Knox Taylor picked Gilbert who earlier had been his partner at the Gilbert & Taylor architect firm in St. Paul, Minnesota. The scandal never quite blew over and in 1913 the Act was repealed.

An acknowledged masterpiece of the Beaux-Arts style, where public transactions were conducted under a noble Roman dome, it incorporates Beaux Arts and City Beautiful movement planning principles, combining architecture, engineering, and fine arts. Lavish sculptures, paintings, and decorations by well-known artists of the time, such as Daniel Chester French (the seated groups of the Four Continents on the front steps), Louis St. Gaudens and Albert Jaegers, embellish the facade, the two-story entry portico, the main hall parallel to the facade, the Rotunda, and the Collector’s Reception Room.

The building is on the National Register of Historic Places, and for both exterior and public interior spaces. The Customs House was one of the earliest designations of the New York City Landmarks Preservation Commission. The site was declared a National Historic Landmark in 1976. The U.S. Custom House stood vacant for almost the entire decade of the seventies. In 1979 Senator Daniel Patrick Moynihan saved the building from demolition and sponsored a bill which appropriated $29.4 million for its restoration.

The interior of the building is dominated by the huge rotunda, which is still one of the largest public spaces in New York. This space provided a ceremonial area in which the daily bureaucratic activities of the Custom’s Service took place. It now serves as a public space and is a gateway to the George Gustav Heye Center, National Museum of the American Indian, Smithsonian Institution. In 1936, Reginald Marsh was commissioned to execute a series of murals in the rotunda as part of the Treasury Relief Art Project, which gave work to artists during the depression.