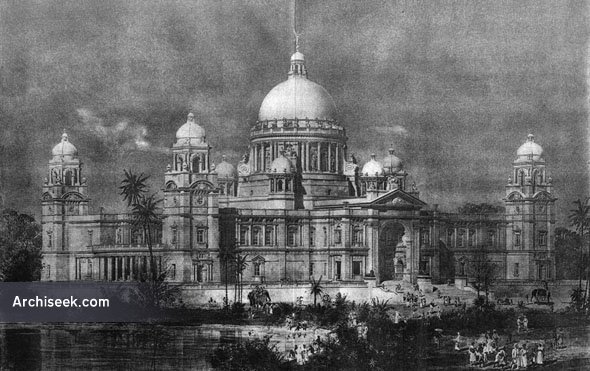 A memorial of Queen Victoria, designed by Sir William Emerson in an architectural style similar to Belfast City Hall. Earlier asked to design the building in the Italian Renaissance style, Emerson was against the exclusive use of European styles and incorporated Mughal elements in the structure. Vincent Esch was the superintending architect while Lord Redesdale and Sir David Prain designed the gardens. The work of construction was entrusted to Messrs Martin & Co. of Calcutta. Built between 1906 and 1921, it is a majestic white marble building at the southern end of the Maidan and surrounded by a sprawling garden. A black bronze Angel of Victory, holding a bugle in her hand was placed at the apex of the dome above the Memorial. It is fixed to its pedestal with ball bearings and acts as a weathercock when the wind is strong enough.