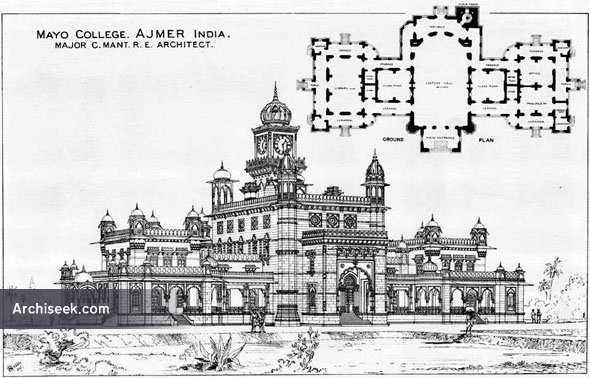 Several designs were submitted in Grecian, Indo-Saracenic and Kolhapur styles by different engineers. The viceroy finally adopted Major Mant’s Indo-Saracenic design in June 1875. The construction began in 1877 and was completed in 1885 at a cost of RS. 3.28 lakhs. Mant’s design became a classic symbol of Indo-Saracenic architecture.

“The Mayo College at Ajmere, which is now being built; was subscribed for some years ago by the native chiefs of Rajputana as a memorial to the late Lord Mayo, Governor-General. Several designs for the building were prepared by officers of the Public Works Department, and rejected as more or less unsuitable. Eventually the Government of India placed the design in the hands of Major Mant, R.E., now Architectural Executive Engineer and Surveyor to the Government of Bombay — an officer who is well-known in India as an architect, and as having made Indian architecture his special study.

The college is intended for the education of the sons of the chiefs and nobles of Rajputana, and has already been open for some years in a building temporarily adapted for the purpose. The new building is designed in what may be termed the Hindu-Saracenic style — a fusion of the Hindu and Indian- ahometan styles, which has already for the last two or three centuries been largely adopted by the Rajput chiefs, and even by well-to-do commoners in Rajputana and the North-West Provinces, for not only their temples and other public buildings, but for their palaces and dwellings also. The style selected harmonises, therefore, with local traditions, and is the most suitable that could be adopted, especially as it is thoroughly capable of adaptation to the exigencies of the climate and to all modem requirements. The college provides a large and hand- some central lecture-hall, library, office, and sitting- room for the principal, and class-room for fifty boys. It will be surrounded by detached boarding-houses, built at the cost of the various chiefs, each for the quota of pupils expected to be sent from his State. These boarding-houses have already been erected, and are more or less Oriental in style. The college will be built chiefly of sandstone ; but marble of several colours, which is found in the vicinity, is also being freely used in its construction. The perspective we gave was drawn by Mr. Herbert Gribble from drawings sent home by Major Mant.”