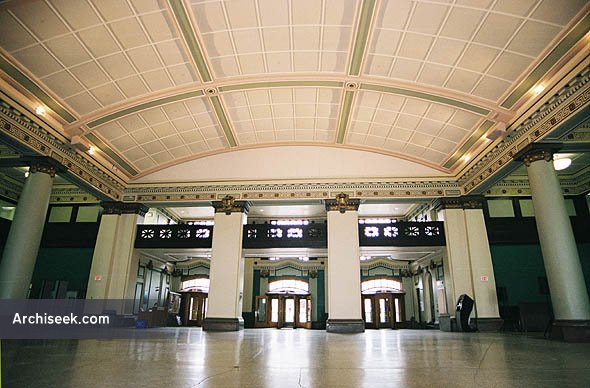 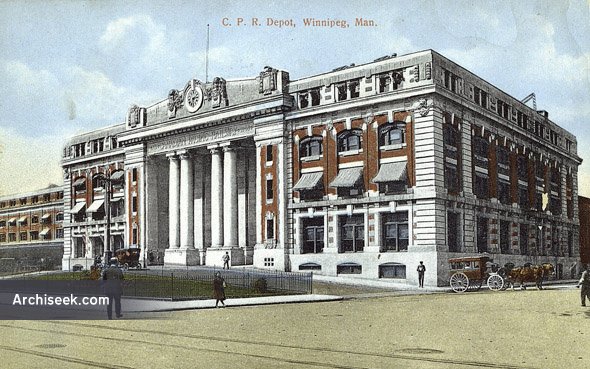 This was the fourth depot built by the Canadian Pacific Railway (CPR) from the construction of the main line through the Manitoba capital in the early 1880’s. Construction began in 1904 and when the station officially opened in May 1905, it was the CPR’s most opulent and grand facility. For many years it was the hub of activity in a booming Winnipeg – and the first place many immigrants saw. Between 1905, when the building was completed, and 1914, when the great waves of immigration were dwindling, thousands of Prairie homesteaders passed through its grand portico.

The station was designed by the renowned Montreal firm of Edward and W.S. Maxwell. Here the Maxwell brothers created an early Canadian example of the Beaux-Arts Classical style. That style was very popular throughout Europe and North America for the construction of large public buildings. The great size of the building, and the choice of style, reflected the CPR’s prosperity and expectations for an illustrious future for the West.

However, changes in the railway sector, and the loss of Winnipeg ‘s primary position in Western Canada ‘s economy, would cause a slow decline in the use of the facility.
In 1978, the newly-formed VIA Rail took over all passenger railway service and chose the Union Station at Main and Broadway for its passenger depot. This ended public use of the station, and by the late 1980’s most of CPR’s office staff had been relocated. The building remained vacant until taken over by theAboriginal Centre of Winnipeg Inc. in the early 1990s.

The Aboriginal Centre of Winnipeg Inc. (ACWI) is a gathering place for people and a centre to foster new ideas in education, economic development, social service delivery and training.