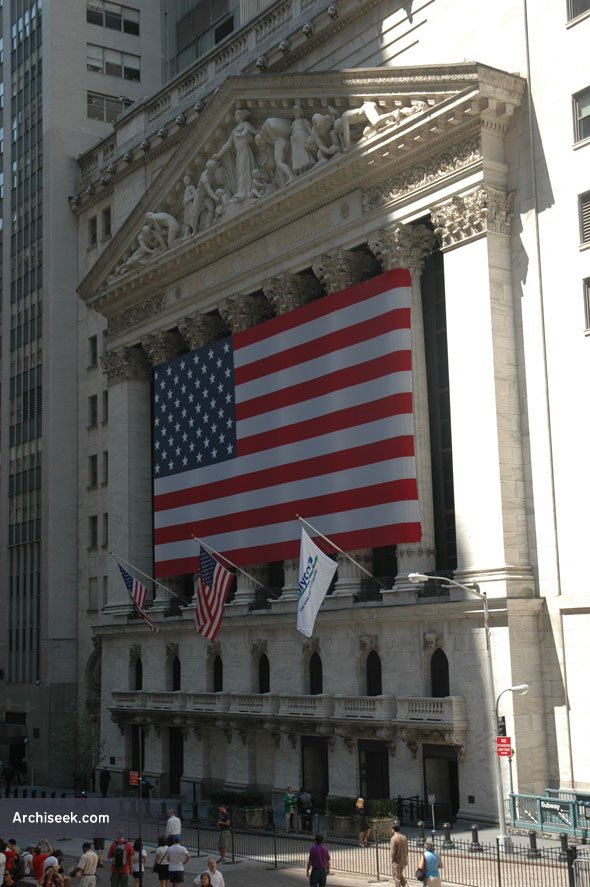 In 1901 the New York Stock Exchange invited eight of New York City’s leading architects to join in a competition to design a grand new building. The Exchange chose the neoclassical design of architect George B. Post. Today, the Exchange building is a New York City and national landmark. There were cost over-runs and delays in construction but it opened to much fanfare in April 1903. The approximately $4 million final cost was explained by R.H.Thomas, chairman of the Building Committee: “Where so many of our members spend the active years of their lives, they are entitled to the best that architectural ingenuity and engineering skill can produce.”

In 1903, John Quincy Adams Ward, a prolific and well-known American sculptor, designed the sculptural figures in the pediment. Entitled “Integrity Protecting the Works of Man,” the classical design depicts the 22 foot figure of Integrity in the center, with Agriculture and Mining to her left and Science, Industry and Invention on her right, representing the sources of American prosperity. In 1936, due to the combined effects of the statuary’s weight””90 tons””together with the ravages of pollution and flaws in the marble, the Exchange replaced the marble figures with lead-coated replicas weighing only 10 tons.