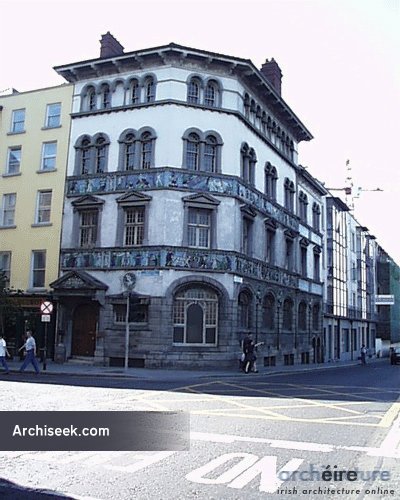 Designed as Dublin offices for Lord Lever (of Lever Brothers), by the Liverpool architect Edward Ould who also designed Port Sunlight. Built in a romantic Italianate style with its wide overhanging eaves, tiled roof, and arcaded upper floors, the building boasts one of the most unusual architectural features in Dublin – two multi-coloured terracotta friezes depicting the history of hygiene.

For most of the twentieth century, these friezes were quite dirty but a restoration restored the building to its multi-coloured brilliance. Conrad Dressler, a sculptor and potter was engaged to design and craft the series of four roundels and twelve panels around the three faces of the building. The glazed ceramic friezes were made in Dressler’s own pottery works in Buckinghamshire.

The building met with resistance from architects in Dublin at the time due to the fact that a foreign architect had been hired (Lutyens also had this problem around this time). Upon its completion, ‘The Irish Builder’ referred to it as the ugliest building in Dublin, while a few years later the same journal called it ‘pretentious and mean’.

Around the corner on the quay facade, there is a strange little hiberno-romanesque detail which seems at odds with the rest of the building.