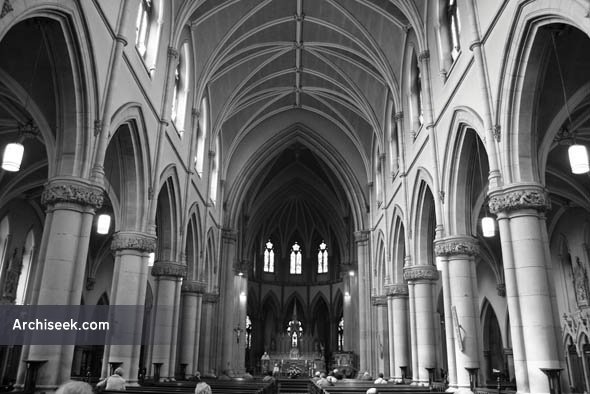 The chancel and transepts were erected, together with a great central tower by George Goldie in the early 1860s. But the construction of the tower proved to be a controversial affair and resulted in a long and costly law-suit which began as a dispute between the architect and builder and ended with the involvement of their client. On foot of a Court Order the tower had to be dismantled. Ashlin & Coleman got involved in 1902 and remodelled the nave and constructed the 200ft tower at the east end.

A description from the Irish Builder in 1902: “The work, which has been in progress for some time, consists of new nave, aisles and tower. The site being about the highest in the city, the new tower will form a commanding feature, and will rise to a height of over two hundred feet to the top of the spire, the dimensions at the base being about 34 feet square. The principal entrance is in the front, which consists of double doors, deeply and richly recessed with Newry granite columns and moulded jambs, while the tympanum is elaborately carved, and has a statue of St. Peter in the centre, the whole surmounted with a crocketted gable and panelling. Immediately over the door is a very handsome window, divided into six lights by moulded shafts, and the head is filled with tracery. This window will look into the nave of the church, and will form, when filled with stained glass, an interesting finish to the end of the nave, as ‘the tower being opened to the organ gallery, with a moulded arch, carried the full height of the nave, affords an uninterrupted view from the chancel. The upper portion of the tower is exceeding happy in the grouping of the pinnacles at the base of the spire. There are two at each angle, the lower ones being connected with an elaborated tracery parapet, having a clock on each side in the centre, finished with a crocketted gable, while the ornate panelling immediately over the belfry windows unites the spire with the tower in a very pleasing manner. The Belfry windows are handsomely treated, and have gables with crockets, and with standing angels between. The octagonal turrets on either side of the tower will give access to the organ gallery and upper stages of the tower, and will be in keeping with its architectural lines as regards groining internally, and the external parapets, etc. The new aisles will be about four feet wider than the old and will be groined throughout, the confessionals being in arched recesses, and each bay being lighted with two single-light windows. It will be of interest to know that Irish materials and workmanship are employed throughout. The amount of the contract will probably run into £25,000, and close on this amount will be spent in Ireland, with the exception of the internal stone for nave piers, which has been got to match as near as possible to the old stone in the chancel. The work externally will be built throughout in limestone, with punched calp stone for the facing, to match the existing work, the buttress, windows, and all external dressings being in white chiselled limestone. The design for the work was entrusted to the eminent architect, Mr. G. C. Ashlin, F.R. I.B.A., and the contract to Mr. James Kiernan, Talbot Street’.”