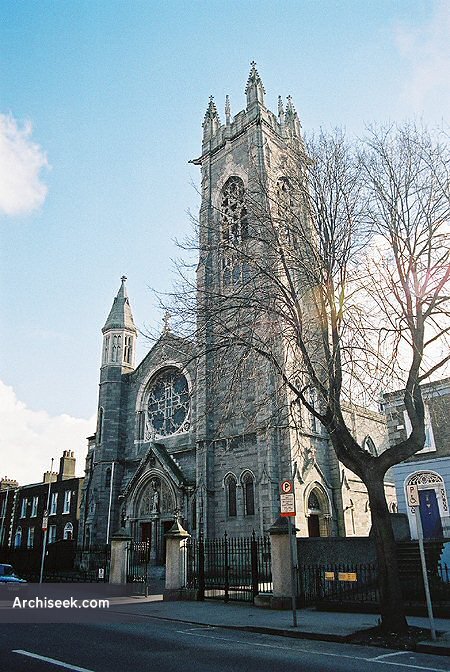 St Mary’s is the product of the work of several architects. In 1839 the original church on the site was constructed. In 1879, the rounded apse and altar by Charles Geoghegan was added. In 1894, the façade, the round belfry and the aisles were added by J.J. O’Callaghan. The fine tower with its delicate tracery was built in 1894 to the designs of W.G. Doolin. The main door has some good shallow relief carving to either side of the statue.

The interior has some good plaster vaulting and some good memorials – in particular a memorial to parishioners who died during the First World War. There is some stained glass windows by Harry Clarke.

A description of the altar in 1881 after its installation – “The altar, which is a fine specimen of art in the early English Gothic style, is the work of Messrs. O’Neill, Great Brunswick-street. It has been executed from a design by Mr. Charles Geoghegan, architect. The principal parts are of Sicilian marble, highly polished. There is a canopy of Caen stone, exquisitely carved. The height of the entire is 18 ft., by 14ft. in width. The reredos is 9 ft. high, and consists of six sculptured panels, sur mounted by a canopy which stands on four pillars of Mexican onyx stone, and is headed by a cross of white Carrara marble. The whole is approached by three steps of Portland stone leading up to an antepodium, consisting of a marble basso-relievo representing two winged angels in an adoring attitude.”