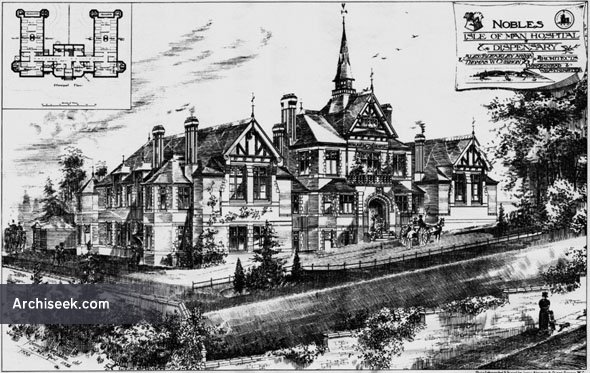 Noble’s Isle of Man Hospital and Dispensary opened in 1888. It was provided by the munificence of the town’s benefactor, Henry Bloom Noble. Published in The Building News, July 2nd 1886. The style of architecture chosen for the new Noble’s Hospital with its red Ruabon brick and half timbered façade, stone window mullions, tall chimneys and bell tower steeple was a highly fashionable and popular design style of the time. It was a style much in vogue for Municipal buildings of the period such as libraries, museums, public baths, town halls, and of course hospitals.

The hospital building became the new Manx Museum in 1922 having lain unused for ten years following the building of a new and larger hospital on the outskirts of Douglas in 1912. The original hospital building has since been greatly modified during the 20th century with new extensions being built at both ends of the site.