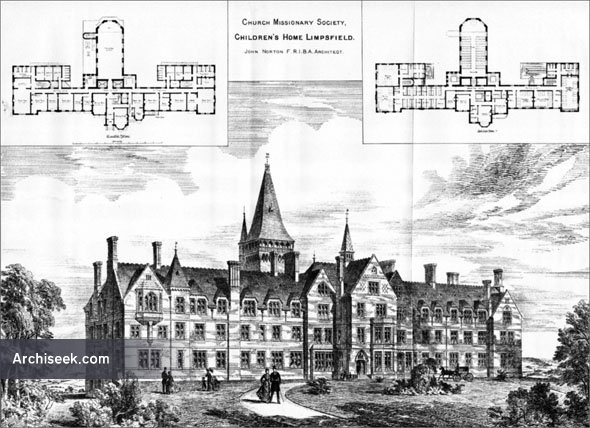 “THE opening of the Society’s new Church Missionaries’ Children’s Home at Limpsfield, in Surrey, took place on July 20th, after the August Gleaner had gone to press. We now give a picture of the building itself, and one of a group of friends photographed in the dining-hall on the opening day.

The old Home at Highbury, which was built in 1853 with a special fund raised at the Society’s Jubilee, has long been insufficient for our needs. Four years ago a house in the neighbourhood had to be rented to accommodate children for whom there was no room. It was not possible to enlarge the building on the ground occupied. Moreover, the children had to walk a mile to their playground. The Committee felt that they must move the Home into the country; but how ? Although the missionary funds are rightly charged with the maintenance of the missionaries’ children, those funds are never spent upon buildings of this kind. Then came Mr. and Mrs. Wigram’s spontaneous gift of £10,000, followed by several others amounting to £7,000 more ; and, accepting these generous contributions as tokens of the Lord’s approval, the Committee went forward with confidence. A considerable sum is expected from the sale of the old buildings; but till they are actually sold, we cannot tell how nearly the proceeds will cover the balance of cost. Additional freewill offerings will, however, certainly be needed.

The new Home stands on a hill, 480 feet above the sea, in the midst of beautiful country. It is an imposing object in the landscape, and is solid and substantial, but no money has been spent on needless ornamentation. The tower seen in the picture is for the water supply. The chapel, which was a necessity, because the parish church is not large enough to receive the children, is behind, close to the tower. It has been provided by the separate and special liberality of one lady. The building will accommodate 117 children, with the Director and his family, and the resident teachers, servants, Ac.

Warm thanks are due to the architect, Mr John Norton, who not only laboured untiringly, but remitted a large portion of his professional fee, making thereby, in effect, a donation to the fund of £660. But “except the Lord build the house, they labour in vain that build it”; and we must all pray that He, for whose sake our missionaries stay out in the field while their children are sent home to be educated, will Himself dwell in the new Home.” (The Church missionary gleaner, Volumes 14-15 by Church Missionary Society)