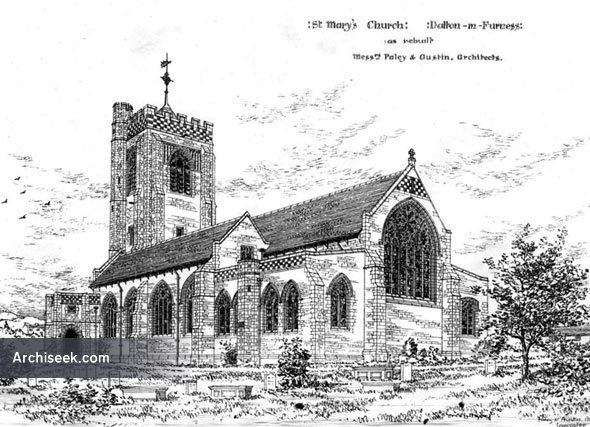 Built between 1883-1885 on a site where it is believed there have been churches since the eighth century. It was designed by Paley and Austin, and is one of their most spectacular buildings. It is built of red sandstone in a 14th Century Gothic style. The red and white chequered stonework on the square tower and the upper walls is distinctive. The decision to rebuild the Church was taken with the promise of financial help from James Ramsden, Henry Schneider and others of wealth in the area who felt that Dalton as the leading church in the area, should not be less imposing than ones recently built in the new borough of Barrow-in-Furness.

There is a 14th Century font, much weathered, and bearing the shields of Furness Abbey. There is a peal of six bells in the large tower. The ancient glass in the North porch is of figures of saints, and is believed to be from the ancient Church 1320-1360. All the rest of the stained glass is Victorian, in the chapel by John Hardman, and elsewhere by Burlison and Grylls, Shrigley and Hunt, and Heaton Butler and Bayne.