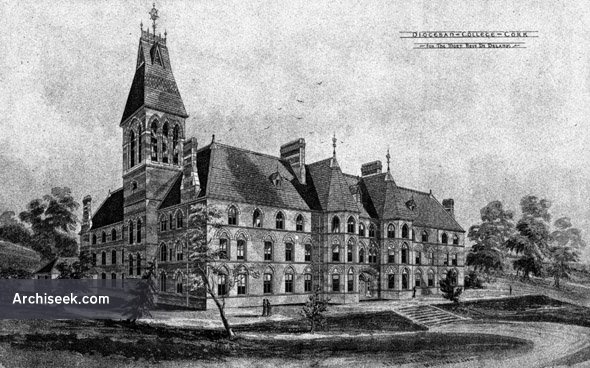 Designed for The Most Rev Dr. Delany as a Diocesan College attached to the Roman Catholic Diocese of Cork and Ross. A secondary school only in its later years, it closed in 2007. Constructed in brick. Front Elevation published in The Architect, May 16th 1885.

“The new Diocesan College, Cork, has been planned to accommodate 60 students. The main front is 159 ft. long, and the return elevations 114 ft. and 104 ft. respectively. It commands a splendid view of the city, being built on a very elevated site. The ground floor is appropriated to the reception rooms, class-rooms, study hall, library, chapel, sacristy, professors’ room, refectory, kitchen, and offices, &c., all of good proportions and conveniently arranged around a spacious corridor having windows looking into court, at rere, which will form a good cloister for the students in inclement weather. The chapel will be a very pretty structure, with semi-octagonal apse, and a neatly panelled roof of pitch pine. On the first floor are arranged the professors’ rooms, a cheerful sitting-room and bedroom being provided for each on principal front. The rest of this floor is arranged for students’ rooms, &c., opening off well-lighted corridors. The second floor is almost similar to last described, and consists of students’ rooms, a large dormitory, &c.

Great care has been bestowed on the sanitary arrangements, which will be in every way most perfect and complete. The exterior of the building is faced with Bridgewater brick, the arches of doors and windows being relieved by white brick, with cut limestone in the cusped heads and tympana, strings under windows, &c. The general effect of the materials is very pleasing. The contractors for the works are the well known firm of Messrs. E. and P. O’Flynn, Watercourse road, Cork; and the architect is Samuel F. Hynes, M.R.I.A.I., 88 South Mall, Cork.”