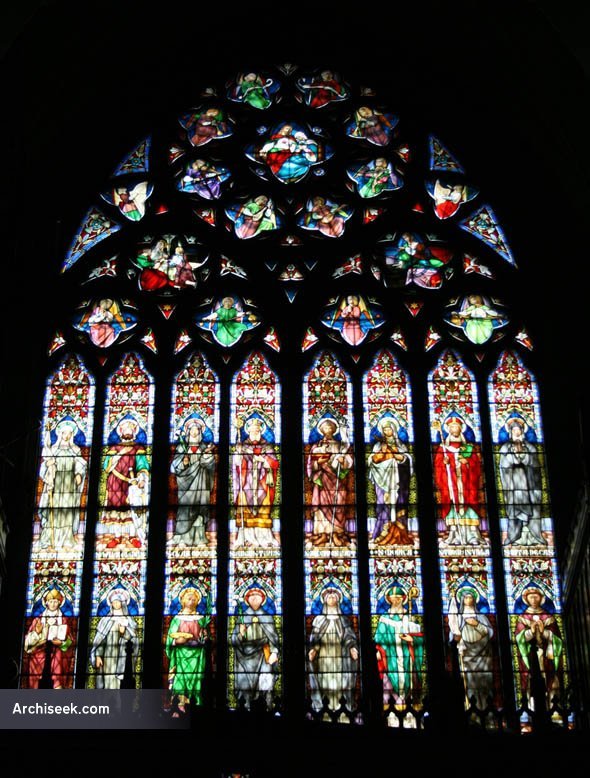 The tallest existing spire in Dublin and sited on high ground so as to be visible from the Liffey valley, SS Augustine and John on Thomas Street was designed by Edward Welby Pugin and executed by G.C. Ashlin. Pugin had already worked for the patrons, the Power family who owned the nearby distillery, now NCAD. The original design was exhibited in 1860 at the Royal Academy and it was not until 1884 that the spire was completed.

The exterior is a polychromic and sculptural dream with the narrow spire in French Gothic supported over a huge nave window by two hipped roof abuttments that mask the aisles. There is a vast amount of white Caen sculpture which starts at ground level with a statue of Christ over the main window, with Saint Augustine above and ends with the colossal twelve apostles on pinnacles around the spire. The stonework is red sandstone with limestone and granite dressing and the whole combination provides a powerful effect of a hugely elaborate facade and spire. To the rear of the church are plainer brick buildings to provide ancilary facilities for the parish.

From The Building News: “THE accompanying lithograph represents the south-east view of the building, which is by far the most important ecclesiastical work erected iu Dublin since the Reformation. When finished the church will measure 170ft. in length, by 70ft. in width, not including the transept, and it is 92ft. to the ridge of the nave roof. At present the western end and spire, and about two-thirds of the entire length, are completed. The exterior of the building is of Dublin granite, whilst the windows, dressings, &c., are out of Whitehaven red sandstone, which is found to stand the Irish climate admirably, and forms a pleasing contrast with the gray granite. The sides of the church are comparatively simple in design, bordering as it does somewhat narrow streets, but the west end (a view of which we hope shortly to publish), situated in Thomas-street, is more dignified, especially the western arch, encompassing as it does the great rose window and the principal entrance. The arch itself rises to a height of about 70ft. The windows in the western transepts possess double tracery, which creates a somewhat over- crowded effect. The windows of the belfry are filled with immense louvre boards, such as are” often found in Continental churches, where they were used more from necessity than for effect, but the result is never displeasing, however crudely they may have been applied. The spire itself is principally of granite, which terminates in three wrought iron and copper crosses of great height. At present the’ interior is entirely unfinished; of this we need only mention that the columns, bases, &c., are of red marble. Up to the present time about £30,ii00 have been expended. The architects are Messrs. Pugin & Ashlin. “