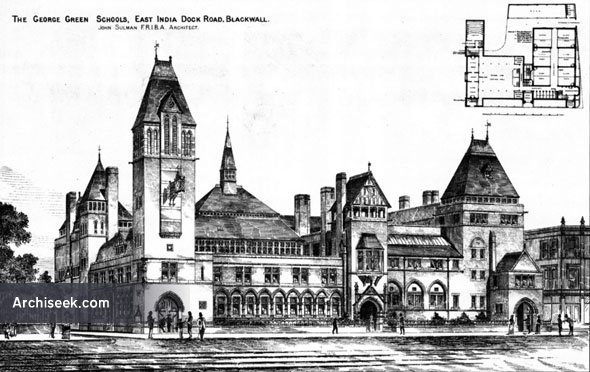 The school was founded by George Green, a successful ship builder from Poplar, who became a wealthy man, but he spent the bulk of his wealth on charitable works. He founded almshouses, sailors’ homes, a chapel and, in particular, schools.

In 1828 the first George Green’s School was founded at the corner of Chrisp Street and East India Dock Road. This building was replaced in 1884 by one at the corner of Kirby Street and East India Dock Road. Finally, in January 1976 the present George Green’s came into being at the southern tip of the Isle of Dogs, facing the Royal Naval College at Greenwich. This, the second building is still in use as part of Tower Hamlets College, the Financial Skills Academy.