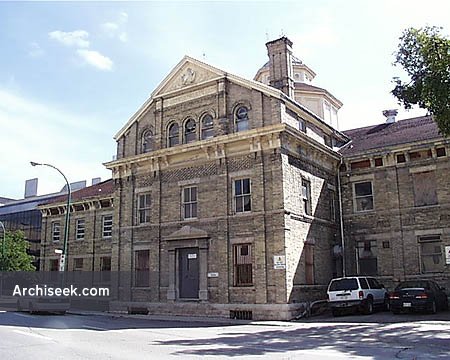 Built in 1881, this building was the provincial jail receiving criminals from Manitoba, Northwest Territories and Ontario. Men, women and children were housed here in the late nineteenth and early twentieth centuries, and public executions held in the exercise yards. Facing up Vaughan Street, the more ornately decorated wing contained the warden’s home. Now empty, the building awaits another use.

By the end of the 1890s structural problems began to show themselves. The city hired Provincial architect Samuel Hooper to do the renovations on the building in 1909-10. He added a plainer face to the north wing and had the title of this building changed to “Provincial Gaol”. The three stage cupola with weathervane was added at this time.