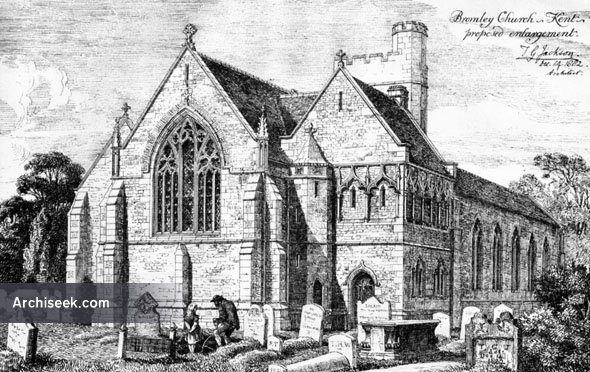 The first recorded rector of Bromley, Richard of Wendover, served from 1226 to 1238. However, as the basin of the present font is Norman, it is possible that a church did exist shortly after the Norman Conquest. An inventory of the medieval church, taken in 1553, refers to rich vestments, beautiful altar furnishings and “4 great belles seated in the steeple”; the church registers go back to 1558 and the vestry minutes to 1703. A new peal of bells was set up in 1773 with eleven shillings worth of beer being given to the bell-hangers. Otherwise the church remained largely unaltered for over six centuries until 1829 when almost all the old church was pulled down and rebuilt in the early nineteenth-century Gothic style;a chancel was later added in 1882 by T.G. Jackson. The church was demolished in 1941 after being destroyed in an air-raid.